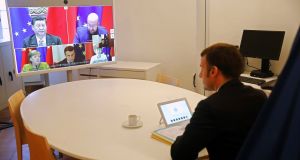 The EU and China have announced a long-awaited deal on an investment treaty, in a move that is aimed at opening up lucrative new corporate opportunities but risks antagonising US president-elect Joe Biden’s incoming administration.

The accord was confirmed by Chinese president Xi Jinping and EU leaders including European Commission president Ursula von der Leyen on Wednesday, bringing seven years of often-difficult negotiations to a successful close.

Valdis Dombrovskis, the EU’s trade commissioner, told the Financial Times that the deal contained the “most ambitious outcomes that China has ever agreed with a third country” in terms of market access, fair competition and sustainable development.

“We expect European businesses will have more certainty and predictability for their operations,” he said. “We have some very welcome changes to the rules of the game, because for a long period, trade and investment relations with China have been unbalanced.”

But the accord may create friction with the incoming Biden administration in the US, which has stressed the need for transatlantic co-operation to put pressure on Beijing.

On Wednesday, an official in Mr Biden’s transition team said: “The Biden-Harris administration looks forward to consulting with the EU on a co-ordinated approach to China’s unfair economic practices and other important challenges.”

Meanwhile, John Ullyot, a spokesman for the US National Security Council, said: “Our allies and partners increasingly agree that the obvious approach when dealing with Beijing is ‘distrust and verify’. Any commitment from [China] that is not accompanied by strong enforcement and verification mechanisms is merely a propaganda win for the [Chinese Communist party].”

A backlash began even before the deal was unveiled. Reinhard Bütikofer, chairman of the European Parliament’s delegation for relations with China, late on Tuesday branded it a “strategic mistake”. He tweeted that it was “ridiculous” for the EU side to try to sell as “a success” commitments that Beijing has made on labour rights in the deal.

The deal will remove some barriers to EU companies’ possibilities for investing in China, such as specific joint-venture requirements and caps on foreign equity.

On financial services, the deal will secure the same benefits for the EU as the US obtained in its “phase one” trade deal with the country, including openings on insurance and asset management.

Other parts of the agreement seek to ensure transparency of subsidies and to set clear rules against forced technology transfer. EU officials said that Brussels has also secured guarantees of non-discrimination compared to state-owned enterprises.

All of these points have been core EU grievances in its trade relationship with China.

By any measure it’s a setback. It validates China’s view that its economy is an irresistible force – despite Hong Kong, Xinjiang, Taiwan and India

For Beijing, the deal will lock in existing market access rights while securing some openings in the areas of manufacturing and renewable energy.

Brussels has pressed ahead with the agreement despite the incoming Biden administration making it clear that it wants a multilateral alliance with the EU and other partners to put pressure on Beijing over human rights and trade.

Mr Biden’s incoming national security adviser, Jake Sullivan, had effectively tweeted against the pact in the days before the agreement was struck, saying the Biden-Harris administration “would welcome early consultations with our European partners on our common concerns about China’s economic practices” in a tweet pegged to a news report that said a deal was imminent.

“Jake’s tweet was very, very careful in the text but the message was unmistakable,” a former Obama administration official told the Financial Times on Wednesday, adding that Beijing’s belated decision to close a deal was part of a deliberate effort to derail the prospect of greater US-EU co-operation over China under the incoming Biden administration. “Jake basically said, ‘Hey, slow things down,’ and that’s not happening.”

“By any measure it’s a setback,” the former official added, saying the deal handed Beijing a diplomatic victory and undermined the Biden team’s hopes for co-operation with the EU over China concerns. “It validates China’s view that its economy is an irresistible force – despite Hong Kong, Xinjiang, Taiwan and India.”

Mr Dombrovskis told the FT on Wednesday that the deal represented a “levelling-up” with the US which has already secured market access and level playing field commitments from China in the “phase one” deal negotiated by the Trump administration.

“We had a certain catch-up to do here,” he said, adding that the EU wants to “engage very closely with US” on trade issues. “I am not seeing the phase one deal or our comprehensive agreement on investment as hindering this co-operation in any way,” he said.

But Thomas Wright, a senior fellow at the Brookings Institution, said on Tuesday that the EU’s choice of pressing ahead with the investment agreement was “unquestionably damaging and will have many justifiably asking if it’s worth Biden’s time placing a big bet on Europe”.

EU officials said the question of labour rights was the final sticking point to be overcome in the talks, with the EU securing commitments that China will work to ratify and implement International Labour Organization (ILO) conventions.

The commitments include Beijing making “continued and sustained efforts” to ratify ILO conventions against the use of forced labour.

China had made important last-minute concessions, European officials said, in what many observers see as an effort by Beijing to get the agreement done before Mr Biden takes office on January 20.

While Mr Bütikofer and others have criticised China’s sustainable development commitments as insufficient, Mr Dombrovskis said that they went further than those made by Beijing in trade agreements with other partners. He also said that they would be subject to a robust “enforcement mechanism”.

The announcement of the deal comes only two days before an end-of-2020 target date agreed on by Brussels and Beijing last year. The agreement will need to be ratified by both sides to take effect. Brussels is aiming for the deal to take effect in early 2022, according to EU officials.