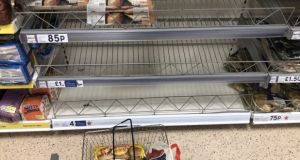 Government officials have raised queries with the European Commission about post-Brexit “rules of origin” restrictions that are disrupting supply chains of foods and other products coming from mainland Europe to Ireland.

Rules of origin are designed to prevent a UK company buying cheap products from a non-EU country and repackaging and rebranding them and then selling them into the EU tariff-free.

The restriction is, however, preventing some products moving between two EU countries where the products are repackaged in UK distribution centres before being supplied into the Irish market.

Under the EU-UK trade deal, signed before Christmas, goods that are unpacked and repacked in the UK - and not subject to further manufacturing - face customs taxes, or tariffs, when reimported back into the EU.

The rules have led to severe disruption in supply chains and food shortages and empty shelves in Irish retail outlets of UK supermarket chains, in the Republic and Northern Ireland, and delayed the shipment of other goods.

Government officials have made “technical inquiries” with officials within the commission “to see what the possibilities are”, said one Government source, though they warned that finding a fix for the issue was unlikely.

“This is Brexit. The UK has left the single market and the customs union. They are a third country. That is the problem,” said the source.

“If a good comes through England, that doesn’t mean that it should come under these rules, but if they are repackaged, there is a problem. That is not transit.

“This is an issue which was unforeseen or not foreseen to the extent to which it should have been.”

Carol Lynch, a customs partner with consultants BDO, said that a good moving from one EU country to another via UK distribution centres should not be subjected to tariffs if it has not undergone any operation “other than what was necessary to preserve it in good condition while in that third country or while being exported”.

“As long as the goods themselves are originally exported from the EU and are subsequently returned to the EU, then they can be returned to any country or entity who can provide proof of export and who can show the goods have not been changed while abroad,” she said in a note to clients last week.

Industry sources have warned that supermarkets which rely on supplies from Britain could find it difficult to keep their shelves fully stocked in the weeks ahead in spite of assurances from retailers and the Revenue Commissioners that there are few if any import issues.

Even large operations with a significant footprint in the Republic have been caught out by the level of paperwork required when importing food and log jams in the supply chain has seen Revenue introduce a emergency code to allow importers temporarily bypass some of the documentation rules on border controls.

“We work with a customs broker and thought we had everything in place to get in and out as necessary,” one large food importer told The Irish Times.

“But the issue that has tripped up so many businesses was the need for an ENS number.”

That number is a safety and security entry summary declaration needed for moving goods on ‘roll-on, roll-off’ lorries and other goods vehicles.

An emergency number was supplied by Revenue to help circumnavigate issues in the short term but the source expressed concern about what may happen if what they described as a “cheat code” is removed in the weeks ahead.

While many retailers and their suppliers had stockpiled goods ahead of January 1st, there is a growing fear that when the stockpiles are depleted, shortages may become more widespread and the real impact of Brexit on Irish consumers will be felt.

“There will be a bumpy few weeks ahead and the UK multiples may have problems ahead if they start running out of stock,” the source warned.

While Marks & Spencer told The Irish Times it remained confident it would be able to maintain supplies, the aisles of its Mary Street store in Dublin were telling a somewhat different story on Sunday.

Although many of its familiar products were available there were also shelves stripped bare and others clearly padded out with significant volumes of the same stock.

“Following the UK’s recent departure from the EU, we are transitioning to new processes and it is taking a little longer for some of our products to reach our stores,” a spokeswoman said adding that it was “ working closely with our partners and suppliers” to ensure stock levels were solid.

A Tesco spokeswoman said there had been a “slight increase” in demand in stores and online in recent days but added that it still had “plenty of stock to go around”.

She said that its “extensive preparation, stock-building and collaboration with suppliers” had meant that its supply chain was “robust and is responding well”.

She added that the retailer would continue to “work with the new processes implemented at ports and have regular engagement with the appropriate officials.

“We continue to work with Government agencies and departments on a smooth transition. We’ve worked extensively with our suppliers to minimise disruption, so we’d encourage our customers not to change their shopping habits at this time.”

Aldi, Lidl and Supervalu said they had had no significant supply issues since the start of the year while Dunnes Stores did not respond to queries from this newspaper.