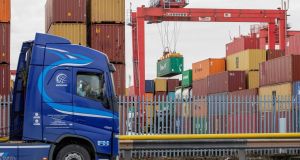 A freight lorry leaves Dublin Port earlier this week. The FTAI has warned of a ‘growing backlog of goods’ sitting in depots because there are not enough agents to process the paperwork. Photograph: Paul Faith/AFP via Getty Images

Supermarket shelves could be soon be stripped bare, prices will climb and supply chains will be badly disrupted unless the Government tackles Brexit-related issues being encountered by freight companies trying to bring goods into Ireland, it has been warned.

In a letter sent to the Taoiseach Micheál Martin on Thursday night, the Freight Transport Association Ireland (FTAI) predicted massive disruption in the weeks ahead as the realities of Brexit-impact trade between Ireland, Britain and Europe kicks in.

“There is a growing backlog of goods of all hues, from mechanical parts (car parts) to electrical household goods, furniture, clothing, food supplies sitting in depots because there are not enough agents to process the declarations correctly,” the letter, signed by the organisation’s general manager Aidan Flynn, says.

It highlights issues “with the systems and there are problems with providing enough support and guidance on the new requirements to industry to make this work. The net result will be that companies operating on very tight margins will cease trading creating unemployment, supply lines will disappear, and the consumer will be left with less supply and increased prices.”

The letter cites an example of a consignment of pharmaceutical goods which could not board a ferry to Ireland because difficulties the operator had when trying to create a pre-boarding notification to enter the ferry terminal. The freight was delayed by four hours and as a result missed a flight option from Heathrow Airport.

The letter also said there was “not enough ferry service supply on direct routes to continental Europe” and added that Ireland’s “vulnerability in these challenging times cannot be overstated”.

What do you think of the plans?
Inside Business with Ciaran Hancock · Interview: Rick Larkin Executive Director at Twinlite

It pointed to statements made by Customs and Revenue Commissioners earlier this week which “appear to confirm that the implementation of the new procedures is progressing satisfactorily”, but added that “the reality is that volumes are low, the profile of traffic is that unit loads of non-food products are clearing customs relatively easily and all this against a background of huge stock piling pre Brexit”.

However, as the stockpile requires replenishment, “the real challenge will come and that is why the current issues that our members have highlighted to us, are a stark warning/signal that there is inevitably going to be huge disruption with many knock on effects to the supply chain”.

The IFTA said the landbridge through the UK carried approximately 80 per cent by volume of traffic to the EU, “and that is effectively out of bounds for almost all exporters due to the potential delays at the Channel ports”.

As many as six out of every 10 trucks returning to this island bring loads to the UK, as the balance of traffic with Europe is such that for every 10 loads we export only four are imported.

“Over a period of time therefore, capacity for transporting our exports will shrink - each roundtrip already takes longer - and there will be less capacity available. This will have knock-on effects for agriculture, pharmaceutical and other industries where speed of delivery is critical.”

The letter said there was “evidence from our members that freight forwarders are refusing to accept freight prior to clearance confirmation; this will clog up supply chains and where companies have traditionally been dependent on part load sized consignments their options for importing are become much more expensive. All these facts add to the reality that there is new cost in the system that will be passed on to the customer.”

The percentage of cargo coming into Dublin Port from Britain and getting Revenue clearance to immediately enter the State has jumped from less than 50 per cent to more than 70 per cent in a week, as carriers and importers grow accustomed to new customs regulations.

At a briefing earlier this week, Revenue’s head of customs operations at Dublin Port, Tom Talbot, said the difference between operations that had prepared for Brexit and those that had not was “quite stark” and he said those who were ready had been rewarded with speedier access to the Irish market.

He said additional checks required by Brexit, as well as the completion of necessary documentation ahead of time, the employing of dedicated customs agents and the provision of necessary funds to cover and taxes due, had seen up to 70 per cent of importers move their cargo swiftly through the port.

Speaking on RTÉ Radio’s Morning Ireland on Friday, Revenue’s head of Brexit strategy Lynda Slattery echoed those comments and said there were challenges facing trade post Brexit and when it came to preparedness it was a “mixed bag”.

“Revenue were out last year clearly setting out what the preparation needed to be. Some businesses did that and some are experiencing a relatively seamless changeover”, she said.