Irish consumers now the most anxious in Europe

Survey finds we are increasingly nervous about shopping, eating out, spending money and using transport 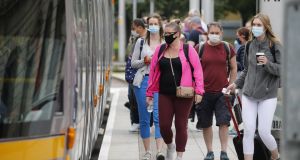 Some 68% of Irish people are planning to limit their use of public transport over the next three months. Photograph: Crispin Rodwell

Irish consumers are now the most anxious in Europe, and are increasingly nervous about shopping, eating out, spending money and using public transport, according to a sentiment tracking survey from Deloitte.

Since soon after the beginning of the crisis the professional services company has been tracking Irish consumers’ attitudes towards personal wellbeing, financial concerns, travel and hospitality, transport and retail. The latest piece of research paints a gloomy picture both for consumers and businesses.

Confidence levels in Ireland have dropped by 6 per cent from a previous wave of research in late July, falling behind France, Belgium and Spain, and making Irish consumers the most anxious in Europe.

Some 50 per cent of Irish consumers report that they are worried about their physical wellbeing, up slightly from the previous wave of research. Concern for their families’ health has also increased by 2 per cent to 62 per cent.

The results are based on a survey of 1,000 consumers in 18 countries. The data was gathered between August 18th and August 22nd, immediately following the implementation of localised travel restrictions in counties Kildare, Laois and Offaly.

Confidence in visiting physical stores was at 59 per cent, down 3 per cent on the most recent survey conducted at the beginning of August.

Some 40 per cent of people reported feeling safe going to a restaurant, a decrease of 4 per cent on the last survey.

Planned expenditure in restaurants had decreased significantly, falling 13 per cent.

Nearly a quarter said they were worried about making upcoming payments, a jump of 4 per cent on two weeks’ previously, while 41 per cent reported that they were delaying making large purchases, also an increase of 4 per cent.

While confidence in air travel increased slightly, with 22 per cent saying they would feel safe travelling on a plane – an increase of 2 per cent –confidence in hotel accommodation remained consistent at 40 per cent.

There has been an overall reduction in those planning to travel for leisure in the next three months.

The number of people searching for travel deals was at 16 per cent, down 2 per cent, while 23 per cent said they were hoping to avail of private holiday accommodation, down 3 per cent. The numbers planning to say in hotels or take international flights had also fallen.

The report showed 68 per cent were planning to limit their use of public transport over the next three months, up 5 per cent.

The head of consumer at Deloitte, Daniel Murray, said consumer confidence was “extremely fragile and sensitive to changes”.

He said that although overall confidence either grew or remained steady as we emerged from the national lockdown throughout June and July, the “recent uptick in Covid-19 case numbers and the implementation of localised restrictions across three counties have taken their toll on consumers in Ireland”.