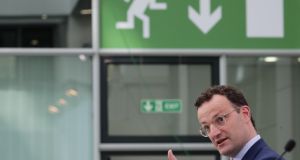 German Minister of Health Jens Spahn: “In the end we have to weigh up in this phase of the pandemic how to balance everyday life and infection protection.” Photograph: EPA/Hayoung Jeon

Germany is debating a shorter self-isolation period – five days instead of 14 – for individuals infected and potentially infected with Covid-19 after chancellor Angela Merkel’s virologist adviser suggested such a move would be risky but workable.

Prof Christian Drosten of Berlin’s Charité clinic, a coronavirus specialist, said the increased risk of shorter isolation needed to be weighed up against the greater likelihood of more people adhering to such shorter isolation and the economic cost of extended work absences.

His proposal was aimed at so-called Covid “source clusters” – virus spread within a family, a flatshare or among party-goers – and not at people arriving in Germany from abroad. Germany operates a 14-day quarantine policy for people returning from high-risk countries.

“By saying five days I am reaching the pain threshold of epidemiology,” he said. “It is a bold claim to say, after five days the infectious phase is over.”

He made his proposal with an eye on a possible rise in infections in the autumn/winter, and employer concerns of a looming sick leave tidal wave.

It remains contested whether after five days the virus concentration in the throat is still high enough to make transmission likely.

The Charité virologist, credited with Germany’s early success in Covid track-and-trace, pointed out that the infectious period begins two days before the first symptoms and lasts up to five days. Factoring in this, along with the delays between test and result, he suggested it “made no sense” at a late stage of the infection cycle to impose a full 14 days of isolation.

Prof Drosten also suggested a shift towards testing not just for Covid-19 but also a second test to see whether a person is still infectious.

Germany’s federal health minister Jens Spahn told journalists on Friday he would consider a shorter isolation period in discussions with regional leaders before a new pandemic rulebook is presented on October 1st.

“In the end we have to weigh up in this phase of the pandemic how to balance everyday life and infection protection,” he said.

Anxious to avoid a second lockdown, Mr Spahn admitted this week that, based on today’s knowledge, Germany should never have shut shops in the spring lockdown.

A week after 40,000 people demonstrated in Berlin against Covid-19 restrictions, many Berlin politicians welcomed Prof Drosten’s suggestion as a sensible compromise.

“If we limit the time to five days, social acceptance for the measure would be significantly higher,” said Dr Lauterbach, a professor of health economics and epidemiology at the University of Cologne.

Germany’s Süddeutsche Zeitung daily agreed: “Some risk remains but, in the interest of social peace, it’s time to take this risk.”