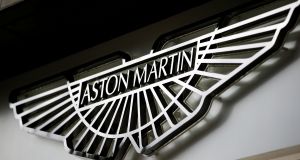 Aston Martin: preparing to float on the London Stock Exchange by the end of the year. Photograph: Henry Nicholls/Reuters

Luxury British sports car maker Aston Martin’s Dublin-born chief technical officer, Max Szwaj, is set to be part of a lucrative employee option scheme as the company prepares to float on the London Stock Exchange by the end of the year, according to the Sunday Independent.

Mr Szwaj, who studied engineering at Trinity College Dublin, joined Aston Martin in December 2016, the newspaper said. The company, James Bond’s carmaker of choice, is owned by Italian and Kuwaiti shareholders and is understood to be seeking a valuation of up to £5 billion (€5.6 billion) in its upcoming initial public offering (IPO).

The Sunday Independent also reports that Irish man Crevan O’Grady’s London-based private equity firm Volpi Capital has acquired a majority stake in a Dutch geospatial mapping, imagery and data analytics company called CycloMedia, in what is understood to be a €60 million deal.

The Sunday Business Post reported that Moody’s has said Digicel’s request that bondholders owed $3 billion (€2.6 billion) swap their notes for longer-dated securities constitutes a “distressed exchange” and a default under the ratings agency’s own definition.

Digicel, owned by businessman Denis O’Brien, unveiled the plan to swap $2 billion of 2020 bonds for 2022 notes and $1 billion of 2022 bonds for 2024 securities in a bid to ease medium-term refinancing risks. The group has a total debt pile of $6.7 billion.

Politicians fear that An Post may close a further 210 post offices quietly over the coming years due to very low business levels at the locations, the Sunday Business Post reports, citing sources such as Independent Clare TD Michael Harty.

Last week An Post announced the locations of 159 post offices that are set to close in the coming weeks as part of a restructuring plan, including 18 offices in Co Galway and 17 in Co Donegal. However, a further 210 post offices have been offered redundancy packages for staff due to their low levels of activity.

The Sunday Times reports that Arthur Molloy and Michael Sherry, owners of haulage and logistics company Molloy & Sherry, are planning a €40 million prime office development in the Dublin docklands.

The two men are seeking planning permission for a nine-storey block near the 3Arena on the north quays of the river Liffey. As part of the development, they plan to restore the facade of a low-rise redbrick building that is a protected structure.

1 Bank leaked my loan request to family who tried to rip me off
2 Coronavirus: Irish holding back on holiday plans
3 Eason acquires rival Dubray Books for undisclosed sum
4 Can I see my father’s previous wills?
5 Solar panels: Are they worth the investment?
6 Ryanair and Aer Lingus monitor impact of coronavirus on travel to Italy
7 Appeals board refuses planning for 146 Clonmel homes in ‘fast track’ case
8 Digicel’s earnings rise as it looks towards refinancing $1.3bn of bonds
9 New Irish commercial property website goes live
10 What is at stake for Ireland in the new Brexit talks?
Real news has value SUBSCRIBE