Technological tools vital for preparing to cope with superstorms 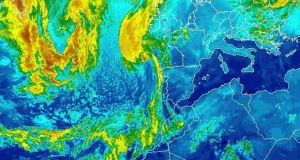 We have received quite a battering from the weather with ex-hurricane Ophelia leaving death and destruction in her wake, quickly followed by Atlantic storm Brian just days later.

Only those who were around back in 1961 when ex-hurricane Debbie blew through Ireland and Britain could have claimed to know what 150km/h feels like. For the rest of us it was a wholly new experience and one we would happily defer for at least another 50 years or better still more.

The power of such storms and the direction they might take today can be measured to a high degree of accuracy using modern technology. The application of these innovations is something that certainly would have helped reduce the risk of death and serious injury given the power of Ophelia, although this is little consolation for the families who lost loved ones to the violence of the storm.

It makes you wonder how it all would have looked to an Irish person standing on the Cork or Kerry shoreline say 150 years ago, before we had radio to send warnings out of the approach of a hurricane-strength storm. Sailors plying the waters of the Caribbean might have recognised the dense grey clouds that spoke of a hurricane, matched by rapidly falling barometers. But who would have believed that Ireland could be struck by one of these superstorms given they tended to track the warm waters of the Tropic of Cancer, and not the cold north Atlantic.

There would have been no satellite images to show the growing strength of Ophelia, no supercomputers purring in the background as they processed vast amounts of data to work out predictions of the hurricane’s path and assumed strength at time of landfall. These systems today give a very early impression of what a storm might do and while there can always be surprises the accuracy levels are typically above 95 per cent.

Go back in time and people would more likely have assumed another strong Atlantic storm was on the way, meaning it was time to hunker down and hope the storm surge wouldn’t get to high. That would have left coastal communities seriously exposed to the much more powerful winds and in some places substantial rainfall delivered by the likes of Ophelia, with much greater risk of injury and death.

In 2017 we had all the early warning that could possibly be delivered. Meteorological buoys collected gigabytes of data, added to by readings taken by vessels closer to Ophelia’s track, delivering yet more grist for the supercomputer mills scrutinising Ophelia. Satellites let us watch as it approached and helped tell us when it broke from being a category 2 hurricane to a post-tropical storm.

GPS also provided an alternative satellite view of the proceedings as they unfolded, particularly after the storm slammed into Ireland. This technology helped to pinpoint locations where power lines were out, where trees had pulled down overhead lines. Meanwhile the on-the-ground impacts were watched by sensor-based technologies that were gauging the flow of rivers, helping to anticipate if they were likely to flood.

Irish companies and academic researchers already have these established technologies that can capture data and yield information to improve forecasting and measure impacts on the ground. And yet more are being delivered. Last week Minister for Communications, Climate Action and Environment Denis Naughten and Minister for Rural and Community Development Michael Ring launched new technology that would come into its own in the context of a widespread storm. It automatically locates where a person has dialled for help using a 999 or 112 call, identifying the caller’s location within about 10 metres. Even without a storm there are an average of 4,000 of these calls each day. Imagine the flood of calls being as Ophelia began its track across Ireland.

The Advanced Mobile Location system was developed by Google and has been brought into service by Eir, Vodafone and Three along with BT Ireland, which has the contract to handle the emergency call-answering service here. The system is based on of GPS, with the system finding and messaging the Android phone’s GPS co-ordinates in about 25 seconds. The system works even if the phone is not connected to the GPS network, making it particularly useful in emergency situations.

As useful and powerful as all these innovative devices are and despite their versatility and complexity, storms such as Ophelia can still trump the best we can do. If the wind is strong enough, if the rain is heavy enough, if the violence of the storm is such that it can pull the plug on our systems then the lights go out and along with them any system without its on capacity to generate electricity. At the end of the day nature will have its way and it finds ways to penetrate and neutralise our best defences no matter how innovative.