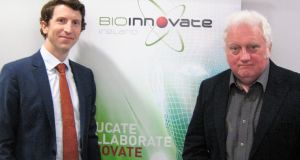 InDX, a new thumb implant from Galway-based medical devices start-up Loci Orthopaedics, has the potential to completely disrupt how painful thumb joint arthritis is treated, according to its founders Dr Brendan Boland and engineer Gerry Clarke.

“The thumb base joint is one of the most remarkably complex but beautifully elegant joints in the body, but when a problem develops, the current treatment options are not great,” Boland says. “Some surgeons take out a bone. Others fuse the joint. Joint implants similar to those used in hip arthritis are also used but they have an unacceptably high failure rate because of the complexity of the joint. What makes InDX different is that it is the only implant that allows the joint to move the same way as a healthy joint moves. It totally reproduces the natural movement, allowing patients to return to full functionality in a matter of weeks.”

The thumb base joint is a small but highly mobile structure located just above the skin crease of the wrist. The bones within it can move in different directions and this remarkable flexibility is both its strength and weakness. Over time the joint can deteriorate, leading to painful arthritis. One in 10 of the general population and one in three women over 55 suffer from the condition.

Boland says the current value of the treatment market for thumb base arthritis in the US and EU combined is an estimated $600 million per year. However, due to ageing populations, this is expected to grow to $1.2 billion over the next 15 years.

“Severe pain is usually the main symptom of this problem, with people unable to turn a key, do up buttons or even write,” he says. “Surgeons generally try to take out the trapezium bone to stop the bones rubbing together and hence remove the pain. However, this causes the hand to become significantly weaker, as it changes the anatomy of the joint so much. Some surgeons will harvest a tendon from the forearm to try and support and reconstruct the joint, but this hasn’t been found to be clinically beneficial. Fusing is another option but function can be significantly impaired, while existing implants have a failure rate of up to 40 per cent.”

Loci Orthopaedics is based at the Business Innovation Centre in NUIG Galway. The company expects to create eight direct jobs over the next three years, while outsourced manufacturing of the titanium implant will also take place in Galway. The company is now looking to raise €2.5 million to fund further development, compliance and distribution. The first clinical trial of InDX in Europe will take place in just over a year and Boland says the device should go on sale in the US in about in 18 months.

InDX has been developed in conjunction with three eminent international hand surgeons and their support for the product means the medical community is already aware of the implant. “We are in the fortunate position of having end users waiting,” Boland says.