OVVO wants you to say goodbye to your Ikea Allen key 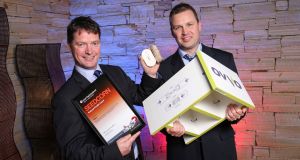 OVVO founder Sean Phillips (left) and Brendan Phillips, chief executive. The company has its sights set on supplying the big names in global furniture retailing such as Ikea, Home Depot and B&Q.

If the budding relationship between furniture giant Ikea and Irish design and engineering start-up OVVO gets serious, you will never again need to hunt for a screwdriver or Allen key to assemble your Billy bookcase.

Dundalk-based design company, OVVO, is only three years old but its revolutionary connection system that joins materials without tools, glue or screws, looks set to shake up the global B2B woodworking and flat pack furniture industries.

“Most people have experienced the fading exuberance of bringing home ‘a box of bits’ from a global retailing giant and spending hours putting a small piece of furniture together while vowing never to shop there again,” says chief executive Brendan Phillips. His cousin and company founder, Sean Phillips, came up with the idea for the connector about seven years ago. Sean’s background is bespoke furniture while Brendan is an engineer.

“The product is truly disruptive in the woodworking industry and has been recognised as such by a number of highly regarded Irish and international awards. All someone has to do is press the two pieces of material together and wait for the ‘click’. This indicates the join has been made. The system is available as a permanent or releasable solution.

“For manufacturers it is a much simpler and more cost effective process than traditional joining methods,” Phillips adds. “It greatly reduces the time they need to spend milling out the timber and also means they can flat pack more of their products and cut down on pre-assembly. Manufacturers are trying to meet customer needs by providing affordable products with ease of convenience, application and assembly and OVVO is perfectly poised to capitalise on these trends.”

The company’s first product is called the OVVO Connection System. Its second, the V range, goes on sale in March. The company’s products are now available in 50 markets.

While OVVO is fast achieving considerable international traction for its connector system, the idea itself had a slow enough start as Sean Phillips had really only been working on the idea in his spare time over a number of years.

The recession changed that. His almost 20-year old high-end furniture company was hit by the downturn and he suddenly had the time to develop the connector into a full commercial proposition. His furniture business continued to tick over and this provided income during the prototype, patent and market research phases while friends and family also chipped in.

OVVO has been completely self-funded to date and all income (the business has been revenue generating since 2015) has been reinvested. Expenditure so far has been in the order of €300,000. OVVO now employs six people and manufacture of its connectors has been strategically outsourced to a facility right next door to its offices.

Robustness and durability are clearly key requirements of this type of product and the company has teamed up with the University of Darmstadt in Germany as its technical partner. “Darmstadt is recognised internationally for its knowledge of the plastics industry and our stress test results for both shear and tensile strengths are equivalent or better than industry standards,” Phillips says.

Ultimately, OVVO has its sights set on supplying the big names in global furniture retailing such as Ikea, Home Depot and B&Q. However, that takes time to happen. In the interim the company’s main customers are small to medium sized furniture makers, shop fitters and the ready-to-assemble furniture market.

The OVVO connection system had its European launch in 2015 and the product was introduced to the US market at the International World Fair in Atlanta in August 2016. “We got a lot of interest from accessories suppliers to the furniture and woodworking industries and as a result we are working towards finalising a pilot with one supplier that will see 25 leading members of its sales team take OVVO into their portfolios for a six month period. The US furniture market is huge – it was estimated to be worth $96 billion in 2014 and is expected to grow at a CAGR of 2.9 per cent through to 2019,” Phillips says.

The company has also been developing a network of distributors across Europe and now has commercial connections in Germany, France, Benelux, Spain and Italy which together account for some 60 per cent of total EU furniture production. In 2012 the global furniture industry was worth an estimated €360 billion and about 25 per cent of this is produced in the EU. The woodworking accessories segment worldwide is worth around €90 billion a year.

While reaction to the OVVO system has been swift and positive, becoming an approved supplier can take a considerable length of time. “I suppose it’s natural to think that because you have such a good product everything will happen tomorrow, Phillips says. “In fact because the product is so innovative, the conversations are long because you’re actually talking about a major conversion process, as people have to be educated about the product.

“With Ikea, for example, the product has to go through all of their regulatory, testing and pilot procedures and that can take up to 18 months. Manufacturers that adopt our system also need time to change their processes. We are in conversation with a number of the global retailing giants and are on a pathway with them that will hopefully see the incorporation of the OVVO system into their manufacturing processes within the next 12-24 months.”

The company is still wholly family owned. As it has generated income from sales since early on so has not gone through the potentially fatal cash burn many early stage ventures experience. “We have only just started looking at angel and VC investment and are interested in raising around €500,000 for R&D, to prime a pipeline of new products and increase our head count,” Phillips says.

“We have just launched our second product in response to customer feedback and as it has a smaller profile than the original connector it significantly extends the range of substrates on which OVVO can be used. It also means that OVVO is fully accessible to every level of the industry from large-scale Computer Numerical Control-equipped manufacturers down to DIY-enthusiasts.

“Architects, interior designers and those associated with prestige construction projects in both the residential and commercial property sectors are increasingly seeking more flexibility in design and we believe that OVVO can inspire and facilitate a much wider range of possibilities,” Phillips says.