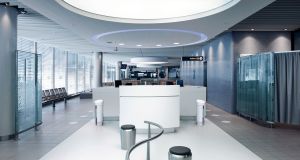 The Delta R shoe scanner created by Stage Gate (SG) 11 for Schiphol is designed to detect explosives and drugs. 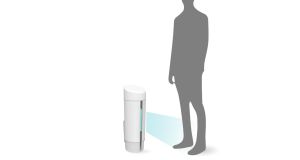 A standalone column 80cm tall with a 30cm diameter, you just stand in front of it for a split second and then walk on.

Some 15 years after the events of 9/11 – the terror attack that changed global aviation forever – Schiphol airport in Amsterdam is to become the first in the world to use new ultraviolet scanners that mean millions of passengers a year will be spared the chore of taking their shoes off at security checks.

The Delta R scanner, developed by a small Dutch tech start-up, is the latest piece of cutting-edge security equipment to be tested at Schiphol – which also began trials last November on a separate piece of kit that does away with the need to take liquids and laptops out of your luggage.

If being able to keep your shoes on may seem like a modest enough achievement to the majority of travellers, the reality is that the technology behind the shoe scanner is, in fact, pretty revolutionary – and that the threat it tackles is one that’s been shown to have horrifically lethal potential.

Remember Richard Reid? Reid became known as “the shoe bomber”, the London-born convert to Islam who tried to blow up American Airlines Flight 63 from Paris to Miami on December 22nd, 2001 – just months after 9/11 – using plastic explosives hidden in the hollowed-out heels of his shoes.

The aircraft, a Boeing 767, had 197 passengers and crew on board, and catastrophe was averted only by the vigilance and persistence of two female flight attendants who challenged Reid as he tried to detonate the explosives, before restraining him with the help of terrified passengers.

Luck, super-charged by sheer desperation, was on their side that day.

Although Reid is 6ft 4in and trained with Al-Qaeda in Pakistan and Afghanistan, they managed to tie him down using plastic handcuffs, headphone cords, belts and seatbelt extensions, before a doctor injected him with a tranquilliser he found in the airliner’s emergency medical kit.

The flight was escorted by fighter jets to Logan International Airport in Boston, and Reid, now 43, is serving three life terms plus 110 years without parole in a “super-max” prison in Colorado. The judge said the sentence reflected the scale of the threat as attempted mass murder.

Technical tests for his court case showed the explosives in Reid’s shoes probably didn’t ignite properly because it had been raining outside the airport and so his heels got wet, combined with the fact that his feet were perspiring as a result of the tension of the attack.

At its most basic, the scanner directs ultraviolet light at the surface of the shoe. Then, using the wonders of differential reflectometry, it compares the light it has just emitted to the light that’s reflected off the shoe, measuring any difference between the two.

Because all substances create their own unique patterns, it can accurately and rapidly – essentially, in real time – detect explosives or drugs by checking anything unusual it finds against a library of possibilities using SG11’s own proprietary algorithm.

In a packed airport like Schiphol – which handles 60 million passengers a year and, at the summer peak, sometimes 200,000 a day – the Delta R is utterly non-invasive. A standalone column 80cm tall with a 30cm diameter, you just stand in front of it for a split second and then walk on.

Crucially for the security staff, this allows them to identify dangerous passengers carrying hidden substances – gaining precious seconds before alerting them that they’ve been rumbled.

So this technology is not simply about improving the passenger experience at airports by removing one more security hassle. It is, quite literally, about saving lives.

Of course, the technology is the key, says Michiel Poppink, but a big element in the success of the Delta R as a highly complex new product is due to the fact that SG11 collaborated in its design with another Dutch company, INTOS, international experts in airport design.

“We had the technology and were aware of the possibilities for its application”, says Poppink. “But we really needed INTOS as a knowledge partner to help design the shoe scanner.

“Their years of experience meant they knew exactly what was needed to transform our ideas into an aesthetic concept – and then into a functional product for optimum performance in an airport.”

“Starting with their idea”, says Jan-Willem Spanjaart of INTOS, “we advised SG11 about the design, material, sustainability and maintenance requirements of the column that’s now the shoe scanner – and as a result of that collaboration, Delta R is manufactured entirely in-house here.”

It was a collaboration that benefitted both sides. And the likelihood is that the same technology will be used before long in other areas, such as scanning baggage and parcels or for automated drugs searches.

Terrorists innovate, however, and so the threat has moved to less-secure locations, such as arrivals areas, check-in halls and security checkpoints themselves, as illustrated by the attacks on Brussels airport in March 2016 and on Istanbul airport three months later on June 28.

Besides the shoe scanner, one of the most eagerly awaited breakthroughs is a scanner using CT (computed tomography) technology that will remove the need for passengers to take laptops and any liquids out of their luggage. Trials are already being held in the US, the UK, and at Schiphol.

In Amsterdam, the CT-type scanners – where x-ray images are combined with digital geometry processing to produce a three-dimensional image of the inside of an object – have been in use since November in two security lanes in two separate halls in order to compare the trial results.

All going well, they should be operating in all 67 of the airport’s lanes by the end of the year. Travellers will still be required to put liquids and gels in sealed plastic bags, but will no longer be asked to take them out of their luggage and carry them separately.

Like those CT scanners, the Delta R shoe scanner is a Dutch tech product with global potential in a marketplace running to keep pace with the many threats that have already shown themselves and the many more than have not. They will certainly keep us safer. But safe enough? Only time will tell.