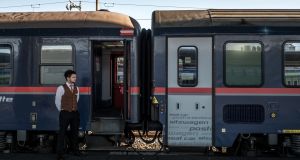 On a recent morning, as Venice, Italy, awakened to crisp November sunshine, a group of travellers appeared on the steps of Santa Lucia Station. They stood in awe of the Grand Canal just opposite, rummaging for sunglasses in their bags.

There were couples, such as Natalia Goia (28) and Maximiliano Amestoy (33) from Uruguay. On a tour of Europe, they had left rainy Vienna the night before, slept in a compartment with reclining seats, and were up and ready to explore Venice before most visitors had even finished breakfast.

“We had lots of sleep,” Goia said, sitting on the steps of the modernist railway terminal, visibly pleased with the 11-hour journey that had led them through the Austrian Alps. They swapped a night in a pricey hotel in Venice for the cheapest fare on the train, she said.

The nighttime link to Venice is among a growing number of destinations offered by ÖBB, Austria’s state-owned federal railway, under the Nightjet brand. In recent years, as operators around Europe wrote off night trains as unprofitable and shuttered services, ÖBB expanded its network, provoking questions about just how the company had managed to do it.

“Sometimes you get lucky,” said Andreas Matthä, the company’s chief executive. In 2016, when Deutsche Bahn of Germany, struggling to cut costs, decided to end night services, he said, Austria was faced with a similar dilemma: whether to invest in costly rolling stock and continue serving a niche market, or to focus on daytime connections.

ÖBB decided to jump on the opportunity, taking over Deutsche Bahn’s most lucrative routes and buying secondhand sleeping cars that, although newer than their own, had suddenly become obsolete.

Passenger numbers have doubled since Nightjet began operating in 2016, and ÖBB said it carried 1.4 million people on the service last year.

Matthä (57) is a seasoned railway man, having climbed the ranks of the federal railway in more than three decades. To him, comfortable and unhurried travel is the main selling point of Nightjets. During an interview, his eyes lit up at a mention of the sleeping-car breakfast, with two Viennese bread rolls, jam and coffee.

“It’s a common misconception that a night train must travel fast,” Matthä said. “The most important is to depart and arrive at a convenient time,” he said, adding that if the train to Venice travelled faster it would arrive at 4am.

The demise of Germany’s night services wasn’t the only factor that helped Austria’s expansion. After climate activist Greta Thunberg sailed the Atlantic in treacherous waters just to avoid flying to a UN summit in New York this summer, many travellers in Europe pledged never to fly again or at least to drop short-haul flights for trains and buses.

Others have campaigned for a Europe-wide effort to revive the Continent’s night trains as a more sustainable way to travel. Germany will raise its tax on flights to domestic and European Union destinations beginning in April, while the value-added tax on train tickets will be reduced in January. The Swedish government is exploring new nighttime connections to continental Europe and has pledged to provide funding for the project.

ÖBB said it expected ridership on Nightjet to increase 10 per cent by the end of this year, to 1.5 million passengers, a rise fuelled by people who want to avoid flying.

Nightjet trains have a variety of accommodations, including seated coaches, youth-hostel-style couchette carriages sleeping four to six passengers at a time, sleeping cars with hotel-style key cards and fluffy bedding and private cabins with their own miniature bathrooms. On some services, travellers can take their cars in trailers and sleep instead of driving through the night.

Prices for a seat to Venice start at €29.90 one way, which is still competitive with airfares, but they quickly climb to more than €100 for a sleeper cabin shared with two others.

Night trains, research has shown, actually cost more to operate because they are less efficient than daytime services. Dick Dunmore was the lead author of a 2017 study into night trains by Steer Group, a consulting firm, for the European Parliament. He said the main obstacles for night trains were track access charges, low occupancy in sleeping carriages, once-a-day routes and the complexity of staffing at night.

Austria may be at the heart of Europe, but every time its trains cross borders they run into hurdles. The Continent’s railways still run on vastly different signalling and power supplies, and, in some cases, incompatible tracks. ÖBB can’t run the same engine to Italy that it does to Germany, Matthä said, gesturing toward a scale model of an engine on his desk.

Still, ÖBB is investing heavily in the future of Nightjet. Production started this year on about €375 million worth of rolling stock from Siemens, including 13 night trains with a new design featuring individual sleeping pods for solo travellers. That move will introduce the first new night trains in Europe since Caledonian Sleeper, connecting London with Scotland, rolled out new hotel-style carriages this year.

The company has high ambitions for becoming a crucial Pan-European railway provider. It already runs international passenger trains in 14 countries and cargo trains in more than 18. Beginning January 19th, Nightjet will expand to twice-a-week services to Brussels, and ÖBB has plans to follow that with Amsterdam the year after.

Even if overnight train journeys make up less than 5 per cent of long-distance travel, the Nightjet brand has helped the company raise its profile across Europe, Matthä said.

And, in Matthä, ÖBB has a strong believer in night trains. In his office, he spoke of the joy of savouring Italian coffee straight off the train in Venice. “Turn left,” he told a reporter at the end of a recent interview, with a hand gesture and a smile. “Espresso ristretto.” – The New York Times Company