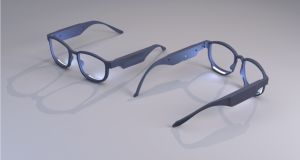 The Sula glasses are linked to a smart phone app, and in the case of jet lag the user punches their preferred sleeping and waking times into the app and it alerts them when it’s time to put the glasses on

As recently as 2013 researchers thought sleep was important for reasons that included boosting the immune system and regulating metabolism. Then they discovered that the brain gets “cleaned” during sleep and offloads toxic byproducts such as the amyloid data thought to play a part in the development of Alzheimer’s disease.

Sleep experts say sleep deprivation is reaching global epidemic proportions making people more prone to illnesses such as depression, cardiovascular disease and dementia. And while this may not be good news for mankind, it is music to the ears of Sligo-based start-up Sula Health, which has developed a novel product to help improve people’s sleep.

Sula Health was set up by Damien Kilgannon and Mark Coughlan in 2018, and at the heart of their invention is what looks very much like a pair of ordinary glasses. But in fact it’s a wearable light-therapy device that uses a combination of blue light blocking lenses and blue light therapy to adjust the user’s body clock. This improves sleep quality, and can also help tackle that pesky affliction of long-haul travel – jet lag.

The glasses are roughly the same size as normal specs, and users can choose to have either a plain or prescription lens fitted. Initially it will be a one-size-fits-all as the cost of offering multiple frame types and colours is cost prohibitive for the fledgling company right now, but eventually there will be a full range of styles and colours.

The science behind the Sula glasses is not new. Light therapy, which mimics sunlight, is a tried and tested sleep improvement remedy, and Sula has been able to tap into existing clinical data to set the optimum parameters for wavelength and light intensity.

What’s novel is the company’s delivery method, and its combination of the blue lens and blue light to deliver maximum therapeutic efficiency. Users simply pop the glasses on and continue with their normal daily routine. Existing therapies such as light lamps and headsets are less practical as they require people to sit down to use them.

In an ideal world humans would be woken by the arrival of daylight. But all sorts of things delay, advance and disrupt the body’s natural circadian rhythms from shift work and jet lag to getting up in the dark.

“With the sort of busy lives people lead now and their constant use of digital devices, the natural sunrise wake-up call doesn’t really work any more,” Damien Kilgannon says. “For general sleep improvement the recommendation is to wear the glasses for 30 minutes every morning. For specific case scenarios such as shift workers and jet lag the time at which they should use the device will vary.

“Other examples of specific case uses are with teenagers whose body clocks are out of sync or older people who are experiencing disrupted sleep patterns.”

The Sula glasses are linked to a smart phone app, and in the case of jet lag the user punches their preferred sleeping and waking times into the app and it alerts them when it’s time to put the glasses on.

The therapeutic light is beamed up from the bottom part of the lens and begins almost imperceptibly before gradually increasing until it’s at full strength.

“Once the relevant information is inputted people don’t have to think about it again, the app will remind them,” Kilgannon says.

The company’s first target market will be those crossing time zones and likely to experience jet lag. The glasses will be sold to this group via in-flight sky shopping catalogues.

The product will also be on general release online, and the launch version, which is due around Q3 next year, will cost around €150.

The Sula sleep hygiene app, which can also be used as a stand-alone sleep aid, will be launched in Q1.

Kilgannon studied physics and mathematics at NUI Galway before moving into a career in software development with startups in Ireland and the US.

“As an engineer I was always interested in the application of technology to improve people’s quality of life, and when we were developing the first prototype of our glasses our focus was on monitoring the progression of myopia in children.

“But as we carried out further development work a much greater unmet need become evident – the lack of non-invasive, non-medicated treatment options for body clock-related sleep disorders. At that point it quickly become evident that the technology we were developing had huge potential to address this issue so we pivoted and refocused our efforts towards sleep disorders.

“An adult sleeping just 6.75 hours a night would be predicted to only live into their early 60s without medical intervention, while two-thirds of adults in developed nations fail to obtain the eight hours sleep recommended by the World Health Organisation, ” says Kilgannon.

“It is this precise problem we aim to solve by helping users match their sleep-wake cycle with their modern digitised lifestyles.”

Sula Health employs four, and the company’s patent-pending technology is in competition with solutions that have not changed much in decades – sleeping tablets and light-therapy lamps.

More recently light-therapy headsets have become available, but Kilgannon says his company’s market research has shown poor levels of satisfaction with these products.

The company has recently completed the BioExel programme at NUI Galway which provides participants with a variety of supports including seed funding and mentoring to help them commercially validate their technologies. Kilgannon estimates investment to date at around €100,000, which has included innovation vouchers from Enterprise Ireland and assistance from Sligo LEO.

“This figure doesn’t in any way reflect the amount of time that’s gone into it and I haven’t had a salary in 18 months. However, you accept that’s how it is, and you can do a lot with a small amount if you spend it wisely. By that I mean listening to the advice of people who have been there before you, and learning from their mistakes so you make smart spending decisions.”

As an example Kilgannon mentions IP and patent protection which can be an expensive process for a small company. “We got good advice about how to advance our IP without spending too much.”

Kilgannon says one of the biggest development challenges was refining the aesthetics. “It was easy enough to miniaturise the electronics, but getting the rest of the design to look just right was tricky.”

Sula glasses are the first in a pipeline of sleep-related products from the company which is now looking to raise between €600,000 and €800,000 from public and private investors to put the device into full production.

Components for the glasses will be made in China and Sligo, where final assembly will also take place.