Fears for autumn and winter water supply if drought continues

Water in Ireland goes through a vigorous filtration process so that it can be consumed by the public. Here's how it's done. Video: Irish Water 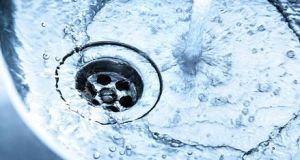 Just 2% of treated water is drunk, with the remainder of domestic consumption going on bathroom and kitchen use, and some 7% on customer-side leaks. Photograph: Getty Images

Irish Water fears that the current drought may see pressure on water supplies extend well beyond the summer months and possibly over next winter.

With rainfall below average since February, current levels of water consumption in the densely populated east coast risk eating into what are essentially next winter and spring’s reserves, thereby amplifying the shortage problem if rainfall remains low throughout the autumn.

Irish Water has now created a crisis management team to help respond to the problem. It met for the first time on Monday, and complements the work of the utility’s drought management team which to date has been monitoring a worsening situation.

Irish Water produces 1.7 billion litres of drinking water a day from some 900 sources throughout the State. However, about 700 of these are ground water bore holes, feeding small treatment plants that can no longer cope with the demand placed on them through population growth and absence of infrastructure investment.

The eastern region where the population is most dense, and hence demand for water highest, has six treatment plants, including three major ones – Ballymore Eustace and Leixlip in Co Kildare, and Vartry in Co Wicklow.

Night-time restrictions of reduced pressure have been applied to 39 water supply sources, a further 130 are at risk

Extracted river water, which is purified by chemicals and filtration through sand, is kept in underground storage reservoirs and fed into the pipe supply system as required.

Just 2 per cent of treated water is drunk (equating to approximately two litres per person per day), with the remainder of domestic consumption going on bathroom and kitchen use, and some 7 per cent on customer-side leaks.

In a statement on Monday, Irish Water’s corporate affairs manager Kate Gannon thanked the public for conserving water. But the utility said its “primary concern is for longer-term supplies in late summer and autumn”.

Night-time restrictions of reduced pressure have been applied to 39 water supply sources and a further 130 are at risk. Reducing pressure reduced loss through leaks (currently about 48 per cent of all treated water) while allowing water to flow to household taps if not into attic tanks.

The current domestic hose-pipe ban in Dublin (no use of a hose to water a garden, wash a car or fill a private pool to the end of July) is likely to be extended to most other areas.

The Health Service Executive said on Monday that local authorities had been asked to prioritise water supplies to hospitals, and all acute hospitals had a reserve supply of 24 hours’ water.

No restrictions have been imposed on commercial entities, but Irish Water has contacted many high consumption users, such as in the hospitality sector, the drinks, technology and pharma industries, and asked them to consider how they could voluntarily reduce consumption.

Dublin Bus has decided not to wash its vehicles as frequently as usual, and Dublin Fire Brigade ceased washing its tenders since Friday. The fire service has also asked crews to draw water from open sources, including where possible the city’s canals, rather than the supply mains, and Civil Defence auxiliary tenders have been placed on stand-by to support the brigade if needed.

Mark Macaulay, assistant planning manager at Irish Water, says the utility is trying to avoid draconian restrictions to supply, such as widespread pressure reduction or night-time outages, in the hope that individuals and industries will act sensibly. He and his colleagues monitor a supply and demand graph at the company’s headquarters in Dublin.

“We’re tracking the line between ‘do we have enough for now, for autumn, for winter, for next year?’ and we’re pretty close to that line but still maintaining levels. But we can’t run the [treatment] plants any harder because we will start to eat into next year’s water supply.”