Counterfeiting is a global phenomenon, and online marketplaces are an increasingly important source of income for criminal gangs 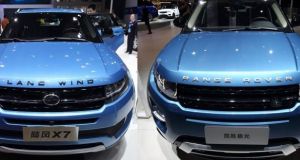 The enormous and growing scale of the problem of counterfeiting throughout the EU – including Ireland – and its damaging effects on legitimate business are brought into sharp relief in the publication of the European Union Intellectual Property Office (EUIPO) report published Thursday.

The 2019 status report on intellectual property rights (IPR) infringement estimates that the EU may be losing up to €60 billion in annual sales through IP theft in goods and services, representing 7.4 per cent of total sales across 11 business categories.

The respective figures for Ireland are an estimated €909 million in lost sales, or 5.4 per cent of total trade.

The sectors examined in the report were clothing, footwear and accessories; cosmetics and personal care; sports goods; toys and games; jewellery and watches; handbags and luggage; recorded music; spirits and wine; pharmaceuticals; pesticides; and smartphones.

Of these the clothing, footwear and accessories sector is the largest of the sectors in terms of sales volume and employment, and the report estimates EU-wide sales losses of over €28 billion a year or 9.7 per cent of total sales here.

In Ireland lost sales in this sector are estimated at around €323 million or around 9.2 per cent of sales.

Counterfeiting is a global phenomenon and, as this report highlights, online marketplaces are becoming an increasingly important source of income for criminal gangs selling counterfeit goods and pirated digital content such as films, TV, music, e-books and games.

Customs seizures at EU borders indicate that these fake products are increasingly smuggled in small shipments and include greater proportions of small parts, including replacement car parts and components for mobile phones such as screens or batteries.

Cheaper production methods and improved technology has allowed counterfeiters to move into the production of everyday goods including basic medicines, shampoo, toothpaste, cosmetics and batteries for laptops and mobiles.

Aside from economic loss there is now concern about the potential harmful health side effects of consuming unregulated products such as chemical damage to skin, the injection of toxic substances and burns from self-igniting counterfeit batteries.

The growth of the Internet has led to a further lucrative market in the supply and consumption of copyright infringing digital content across media such as film, TV, music, games and books.

Earlier research by EUIPO highlighted at least 25 different business models which either directly infringed IP in the sale of counterfeit goods or used the same websites, either on the Internet or the Darknet, to engage in illegal activity, such as phishing, distributing malware or sharing pirated digital content.

As the report notes, criminal gangs have strong motives for engaging in counterfeiting. Aside from the financial returns, risks are lower than engaging in crimes such as drug trafficking and terrorism, with lower sentences and less police/prosecutor focus on these areas.

Greater co-operation between police and EU bodies is having some effect. For example, according to Interpol, in June 2018, Spanish national police dismantled three clandestine illicit medicine labs, seizing more than 5 million doses in an operation in which 29 people were arrested. The raw material had been imported from China to labs in Spain, where the final products were assembled.

Europol supported Spanish authorities throughout the investigation with data analysis and information exchange on action day.

Three experts from the Intellectual Property Crime Co-ordinated Coalition Centre were deployed to Madrid, Malaga and Valencia equipped with mobile offices and universal forensic extraction devices to support the investigation on the spot. Information gathered during the operation was analysed in real time and cross-matched against Interpol’s database.

The EUIPO is working closely with Europol, including making a financial contribution to Europol’s IP crime unit. Among other initiatives it has also established an IP enforcement portal which allows rights owners to establish a secure line of communication with customs officials and police to protect against counterfeits. The service allows rights owners to upload data on their IP rights, making it easier for authorities to identify counterfeits and take action.

However, given that the estimated value of seizures of counterfeit goods in the EU is just €12 billion – representing 439 million items seized – but that counterfeiting is estimated to account for 6.8 per cent of the EU’s total imports (up from 5 per cent in 2016) the evidence indicates that the fraudsters are currently winning the battle.

In terms of the provenance of counterfeited goods and services, the main offenders are China/Hong Kong, followed by Turkey, the UAE and India.

Speaking to The Irish Times, the head of the communication service at the EUIPO, Luis Berenguer, says that while he cannot comment on specific cases and national-level initiatives are not part of his organisation’s remit, he does observe that rights holders in China and Hong Kong frequently have their IP rights infringed. Hong Kong and China ranked 19th and 23rd respectively on the list of global economies most impacted by counterfeiting and piracy.

“This indicates a threat to the innovative efforts of Chinese companies that rely on knowledge-based capital and that use intellectual property rights as part of their business strategies. It is reasonable to expect that as Chinese companies develop more and more valuable IP, such as powerful brands and innovative technologies, the issue of protecting that IP will assume increased importance,” he says.

The experiences of Japan and Taiwan by way of examples suggests that as countries develop and move up the value chain from being low-cost manufacturing centres to being higher-value players, their appreciation and respect for IP increases.

Berenguer again would not comment on individual countries but does acknowledge the link between strong IP rights protection and economic prosperity.

“Our research over the past six years has shown the immensely important role that industries that are rich in IP rights can play in contributing to GDP and job creation at national level. IP rights intensive industries support around one in every three jobs in the EU and contribute around 42 per cent of GDP.”

He cites a study his body undertook in conjunction with the European Patent Office which highlighted that EU SMEs that apply for patents, trade marks and designs have a higher growth rate than those who don’t. SMEs that apply for a bundle of IP rights stand a 33 per cent higher chance of becoming a high-growth company.

“Is that just specific to the EU? Probably not but we don’t know for sure. We’d like to see these studies replicated at international level so we can get an idea of how IP positively affects the world economy as a whole.

“It’s our belief that the more people that know about IP and its effects the more they are inclined to respect it and support it. That respect goes up and down the decision-making chain – from citizens to policy-makers and vice versa.”

Enforcement efforts in this area are one thing, but tackling the demand side remains a bigger problem. Lower prices, easy access and the lack of social stigma around purchasing pirated goods and services are all highlighted in the report as reasons why consumers purchase counterfeit goods and services.

Changing attitudes and behaviours amongst younger people who, the research confirms, have a greater propensity for buying illegal goods and services is one priority for the EUIPO. It has rolled out two initiatives aimed at two different groups of young people.

The EUIPO carries out surveys every three years regarding European attitude to IP. The last survey in 2017 highlighted that 41 per cent of young people said that had wondered whether or not an online search was legal. As a result, the agency has created a portal called agorateka.eu which allows users to search for legal content in their own member state.

Berenguer notes that the online advertising chain is extremely complex and highly automated, and says that the agency has taken a number of initiatives to reduce inadvertent brand advertising on suspected copyright infringing websites.

In 2016 the UK-based carmaker sued Jiangling Motor Corporation over its Landwind X7 sport utility vehicle, which the company claimed bore an extremely similar resemblance to the Range Rover Evoque. The Beijing Chaoyang District Court ruled in March that five major features of the car were copied, and ordered Jiangling to cease production, sales and marketing of the vehicle.

Several international car-makers have complained about local brands copying their designs, but the case is the first time that a Chinese court has ruled in favour of an overseas manufacturer over a Chinese carmaker.

In 2008, Fiat sued Great Wall Motors for copying the design of the Panda car in a case that was successful in Italy – banning the sale of the Chinese car in Europe – but that had no bearing on sales in China.

In 2016, a Chinese clothing company lost a court battle with BMW for using a logo that was similar to the German car brand’s emblem.

Other cases around copycat designs have been highlighted across the industry, though have never been subject to legal action, such as the Zotye SR9, a vehicle that closely resembles the Porsche Macan.

4. Logistics facilities: poor tracking and tracing of consignments and lack of governance at ports, railways and motorways, facilitates counterfeiting;

5. Transparency: lack of information collection and data exchange and lack of co-operation between border and government agencies facilitates fake trade.

Top 10 sources for counterfeits into EU