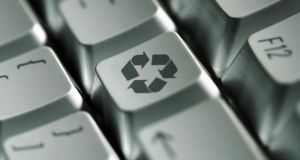 “Consumers will become reusers, and so consumables will have to become recyclables. Remanufacturing, refurbishment and repurposing may well become the only acceptable basis for retail.”

Growth is the investment thesis of the worldwide technology industry. Steady, predictable growth of both top-line revenues and bottom-line profits keeps shareholders content and attracts new investors. As a direct consequence, start-ups are frequently seen as full of enormous risk and challenge not just for entrepreneurs, but for the investors who support them.

But reflect for a few seconds: how can you expand a technology company which already has annual revenues of well over €100 billion (€90 billion)? For technology giants such as Amazon, Apple, Google or Microsoft to increase annual revenues by just one single per cent requires they each add at least a billion dollars of sales each year. For a new start-up business to achieve $10 million of annual revenue, yet alone $100 million, would generally be considered a huge success. In comparison, finding at least one billion dollars of growth each and every year seems almost inconceivable – but that is what the investment thesis for the technology giants requires.

The relentless expectation of growth drives companies beyond their historical revenue base into new markets. Apple does not expect to grow solely based on increasing the number of smart devices and computers it sells, nor on the number of music and movie titles which are downloaded by its customer base. It has expanded into, for example, contactless retail payments.

Amazon does not expect to grow by simply relying on consumers to tap and poke at their smart devices and computers to order even more goods online, but has branched out into speech-recognition devices for the home with the hypothesis that audio interaction should enable even more convenient shopping.

Google does not expect to grow its advertising income based solely on which web sites consumers visit using their smart devices, but also on to where they travel and drive, and on how they spend their time.

Expanding revenue inevitably tempts technology companies to morph from benign coexistence to direct market competition. The music industry, especially artists and record labels, has had tough lessons from the digitisation of content. The automobile industry is currently convulsing in the changes from petrochemical fuels to electric propulsion, and from human to automated driving. Contactless payments are transforming the retail banking industry, but digital banking and cryptocurrencies threaten even deeper disruption.

The drive for growth also disrupts the technology industry from within, as some technology partners transition from benign partnership to market competition against one another. Nvidia is a specialist company which designs chipsets specifically for processing of images and video, and its products are widely incorporated by many smart device and laptop manufacturers. It is, however, now about to directly compete with some laptop manufacturers, not least Apple. Microsoft and Intel used to be Romulus and Remus founders of the personal computer industry, but now Microsoft is aligned with Qualcomm for mobile and smart devices.

Choosing to enter a market in which a company has relatively little prior experience, in the relentless drive for growth, is a substantial challenge. Disrupting an existing industry – such as retail banking, or automobile manufacture, or music distribution – requires thoughtful navigation among established brand names, attempting to outwit them with rapid deployment of new digital technology and a more consumer-friendly approach. Sometimes instead, an entirely new market can be created, in which there are hardly any competitors and no established incumbents against which to do battle. Consumers embrace the new market and change their allegiance from an older way of doing things.

Building a new market where none previously existed is a rare and precious opportunity. Steve Jobs integrated technology to enable the human finger to be used as a pointer to prod a touch screen, and thus consumers moved to smart phones and away from older phones and devices with fixed keyboards. As a result, Apple successfully relegated Intel’s and Microsoft’s dominance of PCs. Mark Zuckerberg exploited personal and social messaging to create a social marketplace. Email is now positioned as a quaint tired technology, and associated with spam. Jeff Bezos of Amazon, and others, envisage how speech recognition and speech generation may be about to replace our current physical interaction with devices, especially since touch screens and keyboards harbour germs and contaminating matter.

However, the technology industry is now facing its biggest-ever transformation. Worldwide, our societies and economies are confronted with climate change and the shortage of scarce materials. Economic growth will come not purely from new markets which visionary leaders conceive, but even more so from the switch to reuse and to recycle products. Led by the 2020s millennials, consumable goods may become unacceptable to the public.

Instead consumers will become reusers, and so consumables will have to become recyclables. Remanufacturing, refurbishment and repurposing may well become the only acceptable basis for retail, and the only offerings which the public will be prepared to purchase. As the public switches allegiances, an enormous and disruptive opportunity arises. The next generation of technology giants will grow at multibillion-dollar rates by taking market share from their staid competitors who are too slow to transition to a world in which resources are finite.