US military signs up for war on ovarian cancer

John Holden: For all liberal fears of the US military industrial complex, the massive funding it receives also supports research into issues such as the ovarian cancer 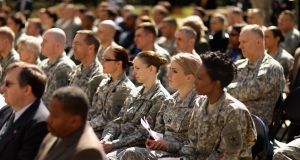 Female participation in the US army accounts for 15 per cent of those in active duty and 19 per cent of their reserve forces. Photograph: Chip Somodevilla/Getty Images

Republicans in the United States secretly love bureaucracy. They might claim disdain publicly for big government. The reality is they relentlessly vote for money to be pumped into the largest bureaucratic machine on the planet. The US military employs hundreds of thousands of staff, working in myriad fields well beyond the battlefield.

The lines dividing those in the military and those working in industries supplying the military with all the resources it needs have become blurred to the point so as to render obsolete the conspiratorial concept of a military industrial complex. No one’s hiding anything any more. (In 2011 the US spent more of its federal budget on its military than the next 13 nations combined.)

Lots of that money must be spent on administration, document processing and other extraneous duties often claimed to be a waste of taxpayers’ money when the bureaucracy being scrutinised is the federal government.

However, in the US the military gets a “get out of jail free” card when it comes to expenditure. If republicans were truly disgusted by public money being wasted, surely the US military would be the first place to purge.

But wait, there’s more. This second revision might not be as popular among those claiming left-leaning anti-American positions. Like Republicans, the US military is not what it seems either. It is, far and away, the largest investor in academic research of all kinds – from the scientific to the sociological – in the US. Some 60 per cent of all university research funding (both to public and private universities) comes from Darpa, the Department of Defense (DoD) and/or other branches responsible for doling out military-funded research and development projects.

Of course much of that investment goes into research that will either directly or indirectly support the continuation of American hegemony throughout the world. But a lot of it won’t.

It’s hard to find nefarious justification for many of the research projects that benefit from grants awarded to researchers from the US army. The DoD ovarian cancer research programme, for example, was initiated to support “high-impact, cutting-edge research that fills unmet needs, establishes priorities to target the most critical needs along the research development pipeline from basic to translational to clinical research, including clinical trials, and to push the field of ovarian cancer forward through our vision to ‘Eliminate ovarian cancer’”.

Women play an increasingly central role in combat. Female participation in the US army accounts for 15 per cent of those in active duty and 19 per cent of their reserve forces. More than 130 women have died and 800 more have been wounded in 12 years of combat in Iraq and Afghanistan.

So it stands to reason that funding for research directly affecting women would become a bigger priority. Gotta keep their soldiers happy and healthy, regardless of gender.

The US military has been increasing the amount of funding it gives to female health-related research for some time. Which is surprising given it is often presented as the one of the most chauvinistic organisations on the planet. Because in truth, historically the vast majority of institutions, organisations and businesses – run by men – tend not to focus on the needs of women either.

Still, ovarian cancer accounts for just 2.5 per cent of all female cancer cases. Granted it has one of the highest mortality rates (in 2018 about 22,240 women will be diagnosed with ovarian cancer in the US, and almost two-thirds will die as a result of their cancer) but it doesn’t seem like the kind of disease a cold-hearted military empire would necessarily be concerned with.

So why would the DoD give a damn about it? Because the US military is simply the public funding apparatus most other western countries incorporate into their public sector. It is responsible for administering research funding of all kinds to various sections in society – healthcare, STEM research, social and political studies, even projects searching for peaceful solutions to conflict.

In my last column I argued how Elon Musk’s Machiavellian tactics – used to get his Tesla Model 3 off the ground and disrupt the automobile industry beyond repair (one of the most environmentally destructive sectors in the global economy) – might be increasingly questionable but still justifiable. Because guess what? Singing Kumbaya My Lord isn’t going to get him over the line either.

Likewise, if health research funding originating from the US army, voted for by conservative Republicans, results in the discovery of treatments for ovarian cancer patients, many of whom will inevitably die, then who gives a damn where the money came from?