Hoping to shrink the odds for pancreatic cancer patients 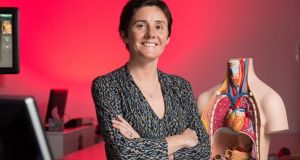 Helena Kelly of the Royal College of Surgeons in Ireland

Pancreatic cancer has the worst survival rate of any major cancer. It is typically aggressive and notoriously difficult to treat and the best chance for survival is surgery. However, not everyone with the disease is a suitable candidate for surgical intervention as pancreatic tumours can be large and can spread.

Up to now the outlook for a patient with an inoperable tumour was bleak, but Helena Kelly of the Royal College of Surgeons in Ireland (RCSI) is hoping to tip the balance more favourably with a new approach to the treatment of the disease. “I am not claiming ‘a cure’, but I am hoping to improve outcomes by making it possible for more people to have the surgery. At present, only 20 per cent of people diagnosed with pancreatic cancer in Ireland every year – roughly 325 – go on to have surgery,” she says.

Kelly’s breakthrough is an innovative treatment platform that delivers drugs directly to the tumour to reduce its size. “ChemoGel is a unique type of hydrogel, referred to as heat responsive, and is liquid at room temperature and semi-solid at body temperature,” says Kelly who is a senior lecturer and principal investigator in the School of Pharmacy at the RCSI.

“It can be loaded with a range of chemotherapy drugs and then delivered directly into the tumour using standard endoscopy procedures. After injection it transitions to its gel state and forms a drug depot in the tumour that delivers a high local drug concentration over a sustained period of time to maximise the impact of the treatment but reduce the side effects.

“There have been no significant improvements in pancreatic survival outcomes in the last 40 years,” Kelly adds. “Just think about that. All of the amazing developments in medicine and technology in that time have had no impact on this disease. One of the reasons – and there are many – clinical outcomes are so poor is partly due to the nature of the tumour itself. It is a very dense tissue and has a poor blood supply. This makes it very difficult for cancer drugs delivered intravenously to penetrate the tumour. It also means that very high doses have to be delivered systemically causing a lot of side effects but with little positive impact on the tumour. If we can make tumours smaller then there is a better chance a patient will become eligible for surgery and will live longer.”

Kelly graduated with a pharmacy degree from Trinity College and followed this with a PhD in drug delivery. She then spent eight years in the pharmaceutical industry across a range of areas including process development and scale up, clinical trial manufacture, regulation and project management. She has worked in the RCSI’s School of Pharmacy for the last 10 years and her specific interests include tissue engineering, biomaterials, pharmaceutics and drug delivery all with a view to designing smart therapies for complex health problems.

“My PhD was in the area of thermoresponsive hydrogels and when I returned to academia this was the area of research I continued to focus on,” she says. “Advances in medical device technology and imaging mean the feasibility of delivering treatments to very specific regions of the anatomy has increased significantly providing much greater scope for the use of hydrogels.

‘Most of my research is looking at using different types of hydrogels in a range of clinical settings such as cancer, diabetes and cardiac applications. The ChemoGel project built on this research and with assistance from the Enterprise Ireland’s feasibility fund I was able to identify a lead clinical application. Then with a commercialisation grant I was able to follow through with initial pre-clinical evaluation.

“Throughout the process I have worked closely with Seona Rossi who has carried out much of the formulation development as part of her PhD studies at the RCSI. The project has also received significant support from the RCSI office of research and innovation which is committed to driving breakthroughs in human healthcare and ensuring that the necessary infrastructure is in place to support researchers to do this.”

The next step for Kelly is to raise funding to begin clinical trials and to build out the ChemoGel team, particularly on the commercial side.

“As this is a sterile injectable medicinal product there is always going to be a high regulatory burden, but we took the regulatory approach into consideration at the outset and have moved to reduce it as far as is possible,” Kelly says.

“We are not developing a new drug per se, the first generation ChemoGel product contains gold standard chemotherapeutic agents that are already used in the treatment of pancreatic cancer and all are already validated for human use. Where the real innovation lies is in local delivery directly to the tumour. This is not currently a common approach to treatment although it has been shown to be clinically feasible for solid tumour cancers.”

Kelly has already begun introducing ChemoGel to clinicians at home and internationally and has identified the most suitable patients for her treatment as those “who have been diagnosed with borderline operable pancreatic cancer or locally advanced pancreatic cancer who may be eligible for surgery if their tumour volume could be reduced”.

It is going to take roughly six years to bring the product to market and in the short term Kelly is looking to raise about €1.5 million to spin out a company to commercialise ChemoGel and begin clinical trials. She would like to conduct the trials in Ireland but the small sample size available makes this impossible.

“We operate on around 60 people a year for the disease. The Mayo Clinic in the US, for example, operates on 350 so the trial can be conducted faster and more cost effectively in a bigger market,” she says. “Our timeframe is ambitious but pancreatic cancer (due to its poor clinical outcomes and current lack of treatment options) is eligible for fast-track designation in the US which will speed up the regulatory approval processes.”

Kelly is now on the hunt for a chief executive to run the spinout and is looking for investors with experience of bringing a medical product to market to back her to the tune of around €7.5 million over the next four years.

“I will stay involved with the project but I’m a scientist not a CEO and from working in industry I know the skillsets you need to bring a product to market. It’s a complicated and complex process,” she says. “Our exit strategy envisions acquisition after Phase I/II of clinical trials and based on comparable acquisitions in similar fields we would expect the technology to be sold for in the region of €75-90 million if we exit at that point.”