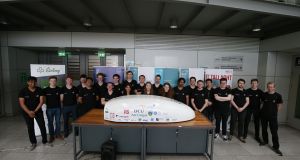 A team of Irish students are putting the final touches to a pod which they hope will travel at a speed of 540km/h in Elon Musk’s Hyperloop test track this month and eventually revolutionise inter-city travel in Ireland.

Éirloop has already beaten the odds to make it to the final in California of the third Hyperloop contest after being selected as one of the 20 finalists from designs submitted by 1,000 student teams worldwide.

The Hyperloop concept was proposed five years ago by Musk, but the SpaceX and Tesla car founder didn’t have time to develop it and published his plan under open-source licensing. The technology, which is being developed around the world, enables people and cargo to move at speeds approaching 1,000km/h through vacuum tubes suspended by magnetic levitation.

The Irish team, which is made up of 47 student engineers, physicists, computer scientists and designers from DCU, Trinity, UCD, IADT, DIT, IT Tallaght and Maynooth University, was formed after mysterious posters were pinned to toilet doors on campuses around the country by Andrew Ashmore, a professor from IT Carlow.

Bartek Baran, Éirloop’s leader and a first-year electronic and engineering student in DCU, responded to the message and joined up with other curious volunteers at a meeting at a Dublin hotel last September.

Baran hopes his design for the pod, which was officially unveiled by Minister of State John Halligan at DCU on June 26th, could be used as a template to revolutionise travel in Ireland.

“Our pod, which travels at a speed of over 500km/h, could do a journey from Dublin to Galway in 20 minutes,” Baran told The Irish Times. “There are huge start-up costs and there are a lot of issues to be dealt with but it’s not sustainable to just have cars, trains and planes. Dublin’s proposed metro is a step forward but it would be better if the Government invested in something larger. We need a new form of transport and it could be flying cars or the hyperloop.”

DCU is the base for the Éirloop and has been become the team’s main benefactor.

“It really has been an inter-college project but DCU came through when we really needed them,” said Nina Kanti, lead software architect at Éirloop who has just finished her fourth year in electronic and computer engineering. “DCU doesn’t’ do electrical engineering but Tallaght does and they have a lab and that’s where we tested the battery packs.”

DCU provided a team of four technicians to help manufacture parts and their full workshop capacity for two weeks, as well as advice from lecturers, who critiqued design.

“A lot of the stuff is open-source and the other teams are helping one and other, but it really is no-man’s land for us,” said Stuart Donnelly, a DCU third-year student and head of mechanical engineering at Éirloop whose only prior experience is in building racing motorcycles.

Akhil Voorakkara, head of electronics, said two “monster” 60kW motors will help power their pod to a speed of well over 500km/h, which would easily exceed the 350km/h speed of last year’s winners.

“We could get the pod up to the speed of sound, but the battery pack would have weighed half a tonne and it would have taken forever to get there,” said Voorakkara, who is also a first-year DCU engineering student. “But it’s about finding the balance of power, weight and speed within the distance of Hyperloop, which is 900 metres.”

To get to this point, the team has had to overcome manufacturing delays and problems raising sponsorship.

The original design entailed a budget of €200,000 but the team were able – with the help of pro-bono contributions from Irish engineering companies – to shrink costs to just €50,000. Of that final figure, they have raised about €40,000. Éirloop has also set up a crowdfunding page called “Get Elon Musk an Irish Jersey” to raise a buffer fund of €3,000 for unforeseen expenses.

UCD, Trinity, and DCU have kicked in €10,000 each to Éirloop, according to Baran.

“The president booked our accommodation while Maynooth paid for our motors and Mirko have been incredible in terms of manufacturing all our parts,” said Baran.

All the materials are Irish-made apart from the Austrian wheels and the springs from the United Kingdom. Some 150 parts were sourced from DCU while the “higher difficulty” elements, such as the sensors and control boards, were provided by sponsors Mergon Ltd, MikroElektronika and RS Radionics.

The pod, which is 1.6 metres in length, 500 in width and 400 in height, is designed as a prototype to run on the hyperloop track on July 22nd – as long as Musk deems it worthy to run on his track. “He’s really in to the tech and he touches the shell of each pod,” said Kanti.

For the SpaceX contest, each team needs to build essential static elements, such as the chassis, shell and aerodynamics; dynamic elements like levitation, propulsion and braking; and “smart” elements like batteries, control electronics and software.

The software on the pod Éirloop consists of two BeagleBone computers which perform calculations simultaneously to ensure complete accuracy of the results, and therefore safe decisions while at high speeds.

Only nine of the 47 team are expected to travel to California. Before they leave, the pod will travel by air-freight to Los Angeles, which takes 10 days.

Their prototype will then be scrutinised for safe operation by SpaceX engineers. All going well, they will then be allowed to have test runs inside the Hyperloop test facility and so compete for the honour of winning the challenge.

Teams that won in the previous years have gone on to be hired by start-ups such as Richard Branson’s Virgin Hyperloop and Delft’s Paris to Amsterdam Hyperloop system.

“When we get over there, it’s like a careers fair as all these huge companies like Airbus and Boeing will all be there and there is a potential to be recruited by them,” said Kanti. “Jaguar is one of our sponsors and one of our guys has been signed up to do an internship with them.”

The Éirloop team are working flat out now that their exams are over, from 9am until 9pm to get the pod finished. “We are really passionate about getting it to work because we are not getting paid for this and we are spending money to be here for the summer,” said Kanti.

If they don’t win this year, Baran has a three-year plan in place so they can keep on challenging.

“If we don’t win this year, we actually designed the front of this pod to be applicable as a pusher for next year and we have another pod lined up,” he said.