Interactive courses help teens stay on top of own wellbeing 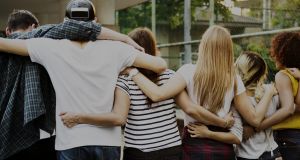 Not many people can say they got the idea for what they wanted to do in life during a silent retreat in the Himalayas, but that’s how it happened for Dr Colm Fallon, founder of the student wellbeing education start-up Project One Sky.

“On the retreat, I came to realise that, in order to properly look after my own wellbeing, I had to look after the wellbeing of others and at that time the most meaningful way for me to do that was through teaching,” Fallon says. He subsequently taught in China, the US, India, Germany and Ireland before setting up his company in June 2018.

Project One Sky’s courses were initially launched as a resource for transition-year students in January 2019 and what makes them different to traditional pen and paper courses is that the content is delivered interactively online and uses a variety of teaching methods, such as quizzes and gamification, to engage its target teenage market.

The courses are accessed via the company’s website and cover physical, psychological and social wellbeing and can be participated in by individuals or schools. The cost for an individual using the programme is €49 while schools get a discounted rate of €20 a head. A new version of the course has been launched to guide teens through the Covid-19 pandemic and the company’s courses will be rolled out to all secondary school students from September.

“EdTech products exist for various aspects of wellbeing such as Internet safety and bullying, but we’re the first that teaches general wellbeing. The general theme of the workshops is helping students to know themselves better and the topics covered including mindfulness, meditation, truth telling, appreciation of nature and intelligent smartphone use. Courses come with automatically corrected homework, pre-planned lessons and an electronically delivered project at the end of the course to focus student learning,” says Fallon who believes that young people need to be formally taught social and emotional intelligence in response to a rapidly changing world and the growing mental health crisis amongst teenagers.

Fallon was an “A” student at school but dropped out of an engineering degree following “an existential crisis”. He studied yoga, tai chi, meditation and various philosophies and religions before going back to college in 2004 to pick up the threads of his undergraduate studies and complete a PhD in physics.

Fallon could have had his pick of jobs when he graduated and indeed had been offered a high-paying post by Siemens in Germany; instead he opted to teach young school dropouts in Berlin. He then taught physics and science in Edenderry and began teaching meditation and meaning to transition year students in his spare time. Project One Sky originated from this experience and Fallon expects to have at least 50 schools signed up to the programme by September.

“Our approach to learning is personalised, it’s easy to implement and it costs a lot less than conventional courses,” says Fallon. “Existing online wellbeing courses are generally basic substitutes for pre-existing methods, rather than leveraging the real benefits of technology. Given the age profile of our users we have to be technology-led and we are currently in partnership with Learnovate [the digital learning and EdTech research centre at Trinity College] to develop further gamification upgrades to our courses.”

Fallon is a recent graduate of the New Frontiers programme at the Learning & Innovation Centre, based at TU Blanchardstown, and his business employs three people. He plans to consolidate Project One Sky’s presence in the Irish market before looking at the UK and Europe for growth. As with many small start-ups, the amount of founder time involved has been substantial but in hard cash terms development costs have been bootstrapped at about €40,000.