Region also plans to have 20,000 people certified in infectious disease control in bid to increase tourism 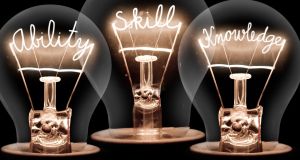 With economic activity coming to a shuddering halt and major employers announcing they will not reopen, there are huge fears here for employment. Photograph: iStock

Innovative thinking, agility and speed of response are key characteristics required to successfully deal with the challenges of coronavirus.

A new task force in Ireland’s mid-west is looking to apply this approach in a region braced for huge long-term fallout from the crisis. The counties of Clare, Limerick and Tipperary employed some 220,000 people in tourism, retail, hospitality and allied areas pre-coronavirus, with some 48,000 in the accommodation sector alone, according to the group. With economic activity coming to a shuddering halt and major employers such as Debenhams announcing they will not reopen, there are huge fears here for employment.

The Regional Covid-19 Response Group, comprising representatives from State bodies, county councils, chambers of commerce, private businesses, unions and academic institutions, was formed following a Zoom meeting attended by 30 people in late March. According to its chairman, Dr Eamonn Murphy, managing director of the Irish Centre for Business Excellence, its guiding principles are to “think big, act small and fail fast” with an industry-led agile and flexible approach.

Training, including both upskilling and reskilling, was identified as key responses and working groups representing the retail, hospitality, customer experience, ICT and pharma sectors were formed.

One of the key insights the group gleaned quickly was that customer experience was an area of great employment potential as representatives from Northern Trust, Virgin Media, Dell, Uber and others, noted that many of the skills acquired by those working in hospitality and retail, were equally useful in customer service roles in industries such as pharma and ICT. Murphy says that about 3,000 jobs could be absorbed by the ICT, pharma and call centre sectors. Four or five specific online courses were identified, and the first participants started training earlier this month

“Take Dell, for example. They told us that that they were recruiting people into customer service from computer science backgrounds. They found computer science was only 30 per cent of what they needed while 70 per cent related to agility, problem solving, empathy, cultural awareness. We then got the personnel manager of Brown Thomas and the general manager of Debenhams to characterise the key skills that many of their people had. There was a very strong match,” Murphy notes.

Another initiative involves a target to have up to 20,000 people throughout the region certified in infectious disease control by August, which will be followed by a marketing campaign to promote the mid-west as the safest region for tourists in Ireland, where everyone from the door staff to the hotel manager and the shopkeeper will be certified. According to Murphy, the industry-led project group has collaborated to solve problems and overcome barriers and rapidly adapt existing courses into QQI-accredited training programmes.

If the crisis has taught us one thing it is the extent of our flexibility, agrees Prof Maeve Houlihan, director of the UCD Lochlann Quinn School of Business, noting the ability of clothing manufacturers to switch to overnight to supply of personal protective equipment and car manufacturers to produce ventilators.

“What is that people in the hospitality sector do, for example? It’s not just about preparing and servicing food, it’s about curating an experience that people enjoy and making people feel both relaxed and valued. These are very transferable skills not only in terms of the private sector but in areas such as healthcare. People can be up-skilled in the more technical aspects of new jobs if they have a good base to build on.”

The education sector very quickly adapted to digital learning, albeit as an emergency response, she says, and while a totally online experience is not always optimal in terms of student experience, it did highlight the sector’s capacity to adapt, which will have lasting benefits. The virus highlighted and advanced the role of educational technologists, specialists who understand the psychology and how to design and deliver the best architecture for learning today, she notes.

Ravin Jesuthasan, author of Reinventing Jobs and managing director at Willis Towers Watson , who has led studies on work transformation and AI for the World Economic Forum, also sees positives in the organisations’ responses to the virus. This is happening both within individual enterprises and in the wider business eco-system, he says.

“Organisations that are seeing a downturn in their skills needs are sharing with those who are seeing an upturn. Instead of an employee-centre approach to layoff, job application and re-employment, now we are seeing a B2B approach where employees with transferable skills are being moved from one organisation to another. In Germany, for example, McDonald’s is sharing its talent with Aldi. ”

Within organisations, silos are collapsing as employees are being rapidly deployed to the front line. Agility is the current buzzword as organisations look to tap the talent within their ranks and deploy them to where they are most needed. If there are skills gaps, they are plugged quickly with digital-based training, he observes.

“What we are seeing is the rapid emergence of a new mindset and leadership muscle that will stick with us as we come out of this pandemic. The traditional model of having work bound up in dedicated job positions that sit within dedicated functions is being replaced by an assignment-based approach,” he says.

Jesuthasan acknowledges that the virus will be painful for certain industries. It will accelerate developments such as AI. “As we see more automation in the workplace and we’re seeing work get deconstructed and redistributed, dirty, dull and dangerous is often the work that gets substituted by automation which frees up the talent to take on more creative and innovative type work.”

One of the benefits of this will be a significant increases in the level of employee engagement which numerous international surveys by the likes of McKinsey and Gallup have shown to be alarmingly low in recent years, with Jesuthasan suggesting that the tide is now changing.

He also notes an increased commitment to training with organisations putting education at the centre of their employee proposition, where recently it existed only at the fringes.

“In a highly volatile environment, where there is no certainty, what will be incumbent on organisations is the promise to keep their employees relevant. The contract is ‘I can’t promise you a job, but I can promise you relevance whether you work here or elsewhere’. Shell is a good example. Faced with a significant downturn where they are reducing their dividends for the first time in decades, they are continuing to invest in upskilling their workforce as they see more digitalisation coming about, which is incredibly admirable. That workforce will be very relevant to a lot of other environments.”