Intel gears up for driverless car race with Mobileye purchase 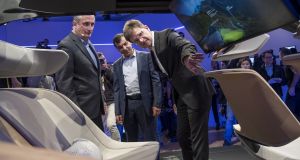 About three years ago, the chip giant Intel seemed like a bystander in Silicon Valley’s race to develop self-driving cars. Google was zooming ahead, producing and testing autonomous cars of its own design and racking up millions of miles in test drives. Uber, the ride-hailing service, was close behind. Tesla introduced its Autopilot feature to its electric cars, using technology from the Israeli firm Mobileye.

Even in microchips, its strength, Intel was scrambling to catch up to its rival Nvidia, whose superfast processors were attracting automakers because of their ability to fuse images from the cameras and radar sensors to detect obstacles. But Intel is betting that it can reshape the competitive landscape with its acquisition of Mobileye, which makes cameras, sensors and software that enable cars to detect what is ahead. With the $15.3 billion deal, which closed on Tuesday, Intel gains instant credibility because Mobileye already supplies technology to most major car-makers and is a leader in areas such as digital mapping and sensors.

“Intel now has a very big footprint in all parts of the autonomous vehicle, the brains, the sensors, the information side, the mapping,” said Mike Ramsey, a Gartner analyst who tracks the development of self-driving cars. “The acquisition clearly puts Intel in the conversation. It guarantees they will be a player.”

Mobileye will remain based in Israel, and its co-founder, Amnon Shashua, will head all of Intel’s autonomous-vehicle efforts. The other founder, Ziv Aviram, is retiring from Mobileye to focus on another company he started, OrCam, which makes artificial-vision devices that allow the visually impaired to understand text and identify objects.

Intel announced its intention to acquire Mobileye in March. The two companies have been working with BMW on self-driving cars and are partners with Delphi Automotive, a supplier of advanced automotive electronics and software. Big investments and outright acquisitions are increasingly prominent in the autonomous-vehicle development race. Ford announced in February it would invest $1 billion in Argo, an artificial-intelligence start-up focused on driverless cars. And last year General Motors acquired another software firm in the sector, Cruise Automation.

On Tuesday, Cruise announced it had developed a ride-hailing app for driverless cars being tested by its employees on the streets of San Francisco. Partnerships have not always gone smoothly. The Cruise application could bring GM into conflict with ride service Lyft, a strategic partner. And last year a public split arose between Mobileye and Tesla after an Ohio man was killed in Florida while driving a Tesla Model S with Autopilot engaged. Shashua said publicly that Mobileye was unhappy with the way Tesla was using its technology. Tesla has since begun equipping its cars with cameras and hardware of its own design.

Intel and Mobileye aim to demonstrate the strength of their combined capabilities in the next several months by building a fleet of 100 self-driving test vehicles. “This is our way to put the technology out so it can be demonstrated not only for automakers but for society, for regulators,” Shashua, who will become a senior vice-president of Intel, said in an interview. Test cars will be sent first to Arizona and then to Jerusalem, a challenging environment with narrow streets and aggressive drivers. “If you can successfully drive autonomously in Jerusalem, you can drive almost anywhere in the world,” Shashua said.

Such a fleet would give Intel something to rival Google’s autonomous driving division, now called Waymo. Over the past year, Waymo has built a sizable test fleet using minivans made by Fiat Chrysler, and it is operating them in several cities. Uber is running tests in Pittsburgh, while General Motors, Ford and other traditional car-makers are creating their own test fleets.

At the same time, the combination of Intel and Mobileye will begin working on a new self-driving system that combines Intel chips and Mobileye’s technology. Shashua said the new system would be about twice as powerful as Mobileye’s current product based on its EyeQ5 processor.

The system will include several key components of a self-driving car – cameras, image-processing capabilities, microprocessors and mapping technology, as well as software that determines how to react to driving situations, pedestrians and other vehicles, known as “driving policy”.

Still, it will not be easy for Intel to pull car-makers away. Nvidia offers chips with more raw processing power, which “have been getting a lot of wins lately”, Ramsey said. Toyota recently chose Nvidia technology for the self-driving cars it is developing. – (New York Times News service)