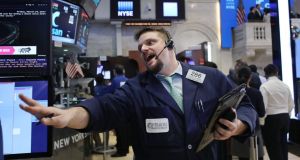 Traders on the floor of the New York Stock Exchange. Films and television portray business owners thinking on their feet before making an instant choice in the face of rapidly changing conditions. Photograph: Spencer Platt/Getty Images

Chris Darwin, the great, great grandson of Charles Darwin, was in Dublin last week to deliver a talk at the Royal Irish Academy. It was a hugely interesting presentation and provided insights into Charles and his wife, Emma, and their long life together. The current-day Darwin also talked about how the two, both deep thinkers, came up with a simple, logical and easy-to-repeat method for making sound decisions.

Charles Darwin, of course, is a rock star of science, the person who worked out how the evolution of species comes about. In 1859 he published his great work on the subject: On the Origin of Species by Means of Natural Selection, or the Preservation of Favoured Races in the Struggle for Life. In the process he forced people to accept that modern man had descended from earlier generations of apes.

Have a look on the web for decision-making and millions of pages are kicked out, many of them promising to teach you the secret of making choices. Many also offer a process built on logic and rational thinking that will see you through the process and help you make good decisions.

We all have to make decisions, little ones such as what to have for lunch, where to go on holidays or what to see at the cinema. Then there are the bigger ones – whether to replace that central heating boiler now or try and squeeze another year out of it, deciding whether you should change the car or put in double glazing. We also face life-changing decisions, whether to pop the question, deciding if you are ready to buy a house or if it is time to start having kids.

When I think of decision-making the first thing I picture is running a business. Choices must be made every day and often in a hurry, some small and some very big. I think of business because if you are a bad decision-maker then your company is bust almost before it can begin. If you choose the wrong staff, rent too much office space, target a market you are not going to win then the company gets into trouble and things go downhill fast.

Despite the importance of all these small and large decisions coming up correct, a lot of value seems to be placed these days in making quick decisions. Films and television portray business owners thinking on their feet before making an instant choice in the face of rapidly changing conditions. This might be a useful attribute if you are trading commodities in the pit of the Chicago Mercantile Exchange but can get a bit dodgy in day-to-day living.

In a change similar to the way some people have started moving away from fast food in favour of slow foods, the Darwins when they had a decision to make slowed things down. Severely. The two married aged about 30, what would have been considered very late in life at the time. Charles’s father was a successful doctor and financier and Emma was a member of the Wedgwood family, those of the famous pottery. Both were well schooled and were encouraged when young to use their heads to maximum effect, something that stood to them in later life.

Between them they developed a slow but effective way to make decisions. They honed the skill when making investment decisions that allowed them to build up a family fortune that would sustain them through life, so they knew they were on to something.

One key requirement of the technique is to make specific time for thinking, not thinking while working or gardening or walking through town but just uninterrupted thinking during which you consider the decision at hand. How many major decision-makers do that as part of their daily routine? Chris Darwin described how they would give themselves say an hour a day to mull over a choice and would employ three strands of reasoning as appropriate. One involved inductive reasoning, bottom-up thinking similar to going from the specific to the general. Another was deductive reasoning, the top-down approach where you start from the general and reduce to the specific.

The third strand was something that business people need to apply but not too often: intuitive thought. This is where innovation is found, where you rely on instincts and on a hunch and make a choice because it feels right. Darwin famously used these processes to decide whether it was better to get married to Emma or buy a dog. Emma won and the two were married six months later and the rest is Chris Darwin’s and his family’s history.

The two had one golden rule when approaching decisions: don’t ignore verifiable evidence that contradicts your favoured choice, conveniently forgetting to check why there appears to be a conflict.