How businesses fail to get the best from software 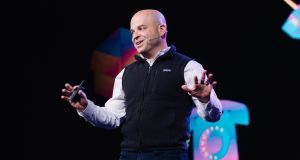 Jeff Lawson: “Don’t blame an engineer for writing bad code. The truth root cause is often not technical but rather organisational.”

Companies that recognise and fully utilise the talents of their software developers are increasingly dominating their industries, a trend that has been hugely accelerated by the Covid-19 pandemic. That’s the view of Jeff Lawson, co-founder and chief executive of Twilio, the New York-quoted tech firm that serves the needs of developers.

“The software that you need to run your business powers your website, your apps, your customer support, that’s the layer that touches your customer. The companies that listen to their customers best and build better versions of that software are those that will win the hearts, minds and wallets of those customers,” he tells The Irish Times.

Software is now the key differentiator in many markets and the key to competitive advantage, he says, adding that the old argument about “build versus buy” has been replaced by “build versus die”. Off-the-shelf software doesn’t cut it anymore if you want to get one over on your competitors. Many of the big winners of the pandemic, including Amazon, are those who have rapidly developed and deployed software to capitalise on new opportunities in areas such as e-commerce and home delivery, he points out.

Twilio’s relatively low profile outside the tech industry belies its scale and influence. It powers communications for more than 190,000 businesses and enables nearly 932 billion human interactions every year, helping to run businesses such as Netflix, Airbnb, Shopify and Uber. The firm has grown rapidly since its launch in 2008, with revenues of $1.13 billion last year and it employs more than 4,500 worldwide. Its EMEA headquarters is in Dublin.

Lawson, an erstwhile Amazon developer who has built Twilio into one of the fastest-growing software firms of the last decade, has distilled his thoughts into a business strategy book published this month. Its title “Ask Your Developer” is a nod to the fact that Twilio isn’t exactly a household name. Chances are though that your software developer is not only familiar with Twilio’s cloud communications platform as a service but has used it to develop an application at some point.

Moreover, though, Lawson’s key takeaway here is a clarion call to business leaders to unlock the capabilities of their developers by putting them front and centre of solving business issues. Too often, he says, they are kept away from the bleeding edge of business, siloed in code-writing functions.

“Product managers, who are generally the key interface with customers, tend to think their job is to protect developers from customers but the best product managers I’ve known do the opposite . . .What you should do is to take your biggest, thorniest customer problems and bring these problems to your developers.”

The trick is to bring a problem rather than a specification, he says. By way of example, he says that instead of telling developers that you need them a create a form with some specific features, you should give them a challenge to reduce the time it takes a customer to sign-up to a service from about 20 minutes to 20 seconds, for example.

This, he says, unlocks the creative power of the developer and motivates them to solve a significant business issue, with both significant gains for the business and a rise in the developer’s job satisfaction. A common misconception about code is that it is more about creativity than calculus, he observes.

He cites the example of how Patrick Collison of Stripe successfully recruited talented software developer Patrick McKenzie, Aka Patio11, a creative, independent-minded developer who was determined not to work for a large company.

Collison, he says, motivated McKenzie by “sharing a giant hairy problem” and asking him to solve it, while providing the resources of a well-funded Silicon Valley start-up. Lawson admits he was jealous he hadn’t figured out a way to hire the talented developer himself.

Too often, however, the narrative follows that of the Dilbert cartoon strip with pointy-headed bosses and geeky programmers inhabiting parallel worlds. Developers have a role here too, he acknowledges: “They need to stand up and say I want to understand the customer problems. Those that do this will feel a great sense of purpose and it will help their careers.”

While his background is rooted in technology, Lawson brings a wider perspective to the book including candid lessons from failed start-ups he was involved in as a young man, before the transformative experience of working with Geoff Bezos and his team at Amazon.

He is major proponent of the lean start-up methodology and its hypothesise, test and adapt playbook. Experiments are vital, he says, and unlock the key to innovation.

By their nature, experiments also involve high levels of failure but failure in a well-designed experiment is invariably good, he says. “A team that comes back after a few weeks and a modest investment that can tell you that the customers don’t like the proposed product are actually doing you a great service because you can release resources into something else.”

One useful strategy for cost-effective experiments is what’s known as a painted-door test. This involves building a quick website, driving traffic to it via the likes of Google Ads and testing a proposition before a product or service is even launched with a “coming soon” sign. “Given the efficiency of online advertising, you can target your hypothesised buyers pretty well and test whether they will hit the pay button.”

The issue is often one of not ramping up sufficiently when you’ve found a clear winner. “What we’ve learned is that when you conduct experiments, you should remember to hold back resources to give much-needed rocket boosters to the winning ones. Amazon does this well. Alexa, its AI-based virtual assistant was an experiment. When Alexa started to take off, Amazon realised that it was on to something special and needed to feed it.”

Having a sense of purpose is more important than financial compensation, beyond paying what is fair, is another lesson he imparts. He quotes the chief executive of Bunq, a digital banking innovator, who says that people don’t work at his company for the money but rather because they believe in what it is doing: “We pay an average salary and that’s what we say to everyone. It’s not high, it’s not low. It’s average. Traditional banks pay above that average salary because frankly nobody wants to work there.”

While he has embraced the role of chief executive of the public company, with all that it entails, Lawson has never forgotten his roots and clearly has huge respect for his technical colleagues.

“To engineers, facts matter. Engineers hate bullshit. So, if you need someone who will tell you the truth, even if it’s ugly, go find a frontline engineer.”

The blameless post-mortem: Don’t blame an engineer for writing bad code. They are human. Instead, knowing that mistakes happen, the question you should ask is why did the system allow that mistake to impact customers. The truth root cause is often not technical but rather organisational.

Invest in infrastructure: Give your developers great infrastructure on which to build. When your tools help you do the job easier and better, it provides a great morale boost and unleashes creativity and productivity.

Learning by doing: Theory only goes so far. Look for projects where the stakes are low, and employees can screw up without doing much damage and can learn in the process. You don’t want an environment where people get shunned or punished for making mistakes.

Think bootcamp grads: Open up to hiring mid-career professionals who have retained as programmers. They have travelled far to retrain, come from diverse backgrounds, have often given up jobs and have shown grit and capability to get where they have.

Divide to conquer: Lawson favours keeping teams small or splitting them in a process he terms “mitosis”. The most important thing is to keep the customer, mission, metrics and codebase together. He likens it to a spring clean or good hygiene when a team or product are growing quickly.

Ask Your Developer: How to Harness the Power of Software Developers and Win in the 21st Century, by Jeff Lawson, is published by Harper Business