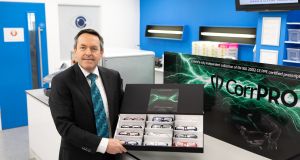 It’s very easy for long-established companies to get stuck in a rut, but Niall McCormack, managing director of Dublin-based Corr Optical, has never been content to rest on his laurels.

McCormack believes innovation is crucial to a company’s long-term survival and following a series of steps up the value chain by his company over its 20-year history, Corr Optical has recently invested €500,000 to launch the first range of safety eyewear produced here by an independently-owned Irish company.

This is significant for several reasons. The safety eyewear market is dominated by multinational brands and the CorrPRO range offers customers an alternative supply chain from a domestic producer.

CorrPRO is the only Irish PPE-certified prescription and non-prescription safety eyewear on the market, and the new range is also Corr Optical’s ticket into the export market. The company has recently signed distribution agreements in the UK and the Middle East, and is in negotiation with a substantial optical chain in Scandinavia.

“Based on the feedback we’ve had so far there is definitely an international appetite for a competitively-priced premium product from an independent producer,” says McCormack whose company won an innovation award for CorrPRO from Fingal LEO last year.

McCormack hit on the idea for CorrPRO from watching how fast employee health and wellbeing were moving up the corporate agenda.

“I had seen wellbeing becoming a buzz word and began thinking about how we could get into this growing market. The world market for safety eyewear is predicted to grow by almost 30 per cent over the next five years.

“Top quality safety glasses retail at around €125 a pair and in Ireland alone 2.2 million people wear glasses. So, even if only 10 per cent of them use safety eyewear professionally or personally, that’s still a significant market before we even start looking overseas.”

Niall McCormack and his wife Aoibhinn set up Corr Optical in 1998 to distribute optical frames, and in the early days McCormack was a one-man band. From small beginnings, the couple built a thriving business, and in 2005 they expanded into lens supply to provide their customers with a more complete service.

In 2011, Corr Optical took what was then a big step for a small company when it built its own glazing laboratory to satisfy its customers’ demands for an alternative source of supply to the UK. In 2016, it moved up another gear with the construction of its state-of-the-art ISO-accredited glazing lab which allowed it to double capacity overnight.

Today Corr Optical employs nine people, with two more jobs due to come on stream shortly. The company’s safety eyewear project was financed from personal funds and by taking a non-equity private investor on board.

Developing a new product from scratch is always challenging, but nothing had prepared McCormack for the effort required to get CorrPRO across the line.

“It took us three years to bring the product to market due to two things: the rigorous requirements of EU testing and the lack of information available about making and launching a new safety product in a market controlled by big international companies,” McCormack says.

“Basically there was no information available in the public domain and you get the distinct impression that the information was not there because the big players didn’t want anyone else entering their space.

“I thought it would take a year to 18 months to lay the groundwork and was unprepared for the brick wall I met when we began the R&D process. We had to go through the BSI (British Standards Institution) to build up the requisite knowledge and we were asking them things they didn’t know the answers to that took them months to find out.

“Had I known then that it was going to take us so long to pull everything together I would probably have given up, but as I didn’t I became like a terrier with a bone until I was satisfied that I knew what I needed to know,” says McCormack.

“I was adamant that our products should match or better the best on offer and I was only interested in achieving the highest possible Optical Class 1 certification for the range.

“This involved preparing a technical file running to 100 pages while the prototype testing took over a year and meant sending 240 pairs of glasses with multiple lens types overseas for testing. However, it was really important to achieve Class 1 because it signalled how serious we were about producing a high-end product and moving into international markets.”

McCormack says the CorrPRO range was designed with two objectives in mind: to meet the most stringent safety requirements and to look good.

“We wanted to create a product that resembled ordinary glasses so people would be happy to wear them. Our innovation is based around combining the best quality materials with the best possible designs to produce a product that is comfortable to wear and provides the same clarity of vision as regular glasses.

“We describe CorrPRO as ‘fashion meeting safety’ so the products come in a range of colours and contemporary designs with presentation packaging that reflect their upmarket credentials.”

Roughly 80 per cent of CorrPRO sales will come from glasses made with a type of polycarbonate lens that can withstand greater impacts than more commonly used plastics.

Different lens options are available and provide features such as increased robustness, tinting, and 100 per cent protection from UV rays.

The frames are made either from flexible lightweight thermoplastic or metal and come with different fittings. The range also includes safety eyewear for the office environment where blue shield technology is used to filter light from screens and other devices.

Potential customers for CorrPRO include opticians and companies in the pharma, food processing, manufacturing, construction, agriculture and healthcare sectors. The company will sell directly to opticians and large manufacturers and through safety wear apparel companies.

“We already have a customer base in 32 counties so that’s our first and most obvious target market, and because we have our own on-site glazing facility we can offer customers a very fast turnaround time.

“We deliver in 6 to 10 working days compared to a lead time of up to four weeks for imported products.”

With the first phase of CorrPRO now launched, McCormack is already turning his attention to his company’s next product which is a range of protective eyewear for sportspeople that will sell under the CorrPRO Sport brand.