A team of experts from China and the World Health Organisation (WHO) believe Sars-CoV-2 is likely to have originated in animals before spreading to humans, either directly or through an “intermediary host”. Video: WHO 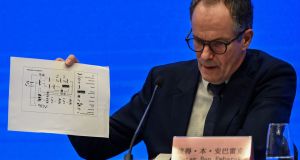 Peter Ben Embarek, head of the WHO mission to Wuhan, at a press conference on Tuesday. Photograph: Hector Retamal/AFP via Getty Images

The virus which causes Covid-19 is “extremely unlikely” to have entered the human population as a result of a laboratory-related incident, global health leaders have said.

Sars-CoV-2 “may have originated from zoonotic transmission”, a team of experts from China and the World Health Organisation (WHO) concluded. But the “reservoir hosts” remain to be identified, they told a press conference.

Dr Peter Ben Embarek, leader of the WHO team investigating the origins of the virus in Wuhan, said: “The findings suggest lab incident hypothesis is extremely unlikely to explain the introduction of the virus into the human population.”

The team have made a series of recommendations for future studies to examine the origins of the virus – including a direct spillover from animals to humans or the virus coming to humans through an “intermediary host”. They have also called for more research into frozen foods. But they said they do not need to research further the possibility that the virus came from a lab.

WHO experts have been probing the origins of the virus in the Chinese city and have spent four weeks there. Meanwhile, there is no evidence that the virus was present in Wuhan before December 2019, they said.

Dr Embarek added: “We did not find evidence of large outbreaks prior to December 2019 in Wuhan or elsewhere.”

The experts added that they “don’t know” the exact role of Wuhan’s Huanan Seafood Wholesale Market in the origin of the virus. A cluster of cases was linked to the market, but officials also found cases among people who had no ties to the market. Some had links to other markets and others had no links to markets at all, they said.

Dr Embarek also said that cold chain transmission of the virus is a possibility and warrants further investigation. ‘Cold chain’ refers to the transport and trade of frozen food. China has pushed the idea that the virus can be transmitted by frozen food and has repeatedly announced findings of coronavirus traces on imported food packaging. However, Dr Embarek, also said the team’s nearly month-long investigation in Wuhan had not dramatically changed the picture of the outbreak. “We know the virus can survive in conditions that are found in these cold, frozen environments, but we don’t really understand if the virus can transmit to humans” or under which conditions, he told the briefing.

Dr Embarek said it would be worthwhile to explore whether a frozen wild animal in a market setting with the right conditions could be conducive to rapid spread of the virus. He said that work to identify the origins of the coronavirus points to a natural reservoir in bats, but it is unlikely that they were in Wuhan, the city where the outbreak was first identified in late 2019. Members of the WHO team have sought to rein in expectations about the mission, with zoologist Peter Daszak telling Reuters last week that one of their aims was to “identify the next steps to fill in the gaps”. Another team member, infectious disease expert Dominic Dwyer, said it would probably take years to fully understand the origins of Covid-19. The United States said China needed to be more open when it comes to sharing data and samples as well as allowing access to patients, medical staff and lab workers. Beijing subsequently accused Washington of politicising a scientific mission. – Reuters and PA