Generation Z matches elders in scepticism about advance of AI 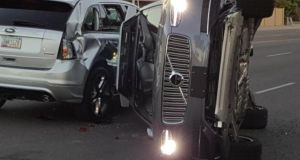 A self-driving Volvo which Uber was testing crashed in Arizona last year.

When assessing who is more prone to be sceptical of artificial intelligence (AI) and machine learning, age is not a significant factor. Generation Z is just as reluctant to embrace robots as Gen Zimmerframe. Even those selling autonomous vehicles privately admit the technology still has a long way to go.

I recently had the opportunity to work closely with one of the world’s leading roboticists. He had developed new technology – an equation, no less – that enabled the application of human-like balance to any bipedal robot with the right components. It took him seven years and a substantial amount of other people’s money to develop this small but universally applicable line of numbers, squiggles and symbols.

Unsurprisingly this clever engineer is a major advocate of AI and robotics as tools which will serve only to “enhance the human experience” rather than diminish it, as so many fear.

I’ll admit, he had me convinced. The middle-aged man’s eyes glowed when talking about his research, like someone much younger – still determined not to allow cynicism infect the joy he took from everything life throws at him.

The professor’s youthful exuberance was rare in a man his age. It may even be rare in men half his age. Members of Gen Z might be labelled a lot of things, but naive they are not. Raised at a time where school shootings are the norm, they can’t afford to be easily influenced.

Regardless, Gen Z teenagers are at a point in life where it’s easy to be swayed in different directions by cultural, technological and social norms.

If you grow up hearing about a technology such as autonomous vehicles (AV) and how it’s on the cusp of changing everything, you would assume this would at least make someone more comfortable with the possibility. A study from Michigan University, however, suggests only 19 per cent of 18- to 29-year-olds say they would prefer to drive a fully autonomous vehicle. This is just slightly higher than the average of those surveyed ranging in age from 18-60 and older.

Gen Z and millennials were also more likely to agree that a whole suite of new rules and regulations would need to be implemented were driverless cars to be allowed on the road.

Earlier this month, Uber released a 70-page safety report to the US National Highway Traffic Safety Administration. However, it was swiftly and cynically followed by a formal request to resume its self-driving programme in Pittsburgh to the Pennsylvania department of transportation, seven months after 49-year-old pedestrian Elaine Herzberg became the first victim to be hit and killed by a self-driving Uber in Arizona.

Uber’s safety report addresses broad “technological and management failings, outlining the company’s efforts since the tragedy to address them.” The ride-sharing kingpin conceded it would be “improving the overall software system design,” or, as one commentator put it, Uber’s robot car would need “a better brain with sharper thinking”.

Uber, like many of its rivals, have already invested too much in AV technology to back down now, despite the occasional bump in the road. Nevertheless, the broad scepticism among those expected to be using self-driving cars every day, consumers, suggests the public is not ready to embrace the technology just yet. If you got your news only from one of the companies competing for a piece of the autonomous pie, you’d be forgiven for thinking everyone will have driverless cars by the end of the year.

That’s their public position anyway. Attendees of Bloomberg’s New Energy Finance’s Future of Mobility Summit were asked to estimate when consumers might realistically be able to buy a fully autonomous car. The room full of America’s motor industry elites, its most influential movers and shakers, were as sheepish as Elon Musk behind the wheel of an AI-powered tractor: 75 per cent said they didn’t expect fully autonomous vehicles to be on the road before 2030.

Of course, the following day many of them returned to their desks and continued promising consumers that the driverless revolution was just around the corner.

Cynicism will get us nowhere. That’s why this reporter decided it was high time he got back among the bright-eyed tech converts – aka students and their faculty – that exist in so many university bubbles across the “educated” world.

After a few days under the spell of the aforementioned robotics expert, I found myself talking with a science undergraduate student in attendance at the same US university.

He told me how he planned on getting a part-time job at a new Amazon factory located nearby. Apparently they offered “flexible work schedules” and the “pay was great”. I gleefully told the student he would probably get the chance to work alongside robots too.

The prospect didn’t seem to impress him. Sure, he said, AI may superficially enhance the human experience but it could also be stifling physical development. “If we keep designing robots that can do every job we don’t like doing ourselves, we eliminate more and more physical obstacles that ordinarily we had to overcome. Our minds may continue to find opportunities to evolve but our bodies? They will be unchallenged and, therefore, will improve.”

I’m not convinced. Methinks the young man just got his hands on a copy of the greatest animated movie of all time, Wall-E, tweaked the plot and is regurgitating his hypothesis all over town. On the other hand, his motivation to be seen to be sceptical of AI is in fact more damning than if he had seemed more credible. Despite AI technology being applied all around us, scepticism continues to be the dominant feeling driving popular cultural perception of it.