US billionaire philanthropist Bill Gates has unveiled a futuristic toilet that does not need water or sewers and uses chemicals to turn human waste into fertilizer. Video: Reuters 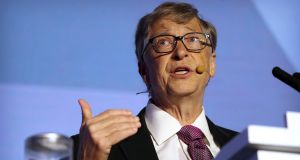 Bill Gates, former Microsoft CEO and co-founder of the Bill and Melinda Gates Foundation, speaks as a jar of human feces sits on a podium at the Reinvented Toilet Expo in Beijing

Billionaire philanthropist Bill Gates has kicked off a Reinvented Toilet Expo in China by using a jar of human faeces as a sidekick.

The former chief executive of software giant Microsoft said on Tuesday that the technologies on display at the three-day expo in Beijing represent the most significant advances in sanitation in nearly 200 years.

The Bill and Melinda Gates Foundation has spent more than $200 million (€175 million) since 2011 to stimulate research and development of safe sanitation technology.

At the expo, the foundation unveiled a futuristic toilet that does not need water or sewers and uses chemicals to turn human waste into fertiliser.

Unicef estimates that 480,000 children under five die every year from diarrhoea, often caused by sewage-contaminated food or drinking water.

There are multiple designs of the toilet but all work by separating liquid and solid waste. “The current toilet simply sends the waste away in the water, whereas these toilets don’t have the sewer. They take both the liquids and solids and do chemical work on it, including burning it in most cases,” Mr Gates said.

He compared the change from traditional toilets to waterless models as similar to development in computing around the time he founded Microsoft in the mid-1970s. “In the way that a personal computer is sort of self contained, not a gigantic thing, we can do this chemical processing at the household level,” he said.

Poor sanitation kills half a million children under the age of five annually and costs the globe over $200 billion (€175 billion) a year in healthcare costs and lost income, according to the foundation.