Climote and 11 other companies selected in programme with prize money of $200,000 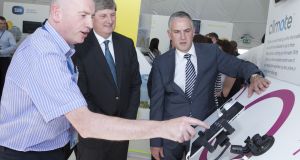 Climote, a Dundalk-based home-heating control company, has been selected for a global energy accelerator programme, “Free Electrons”, which is backed by the ESB. The initiative is designed both to help start-ups get off the ground and give the ESB, and its other utility partners, market intelligence.

According to a statement, Climote will have the opportunities to work with global energy utilities to refine and test products in international markets.

Speaking to The Irish Times, Paul Mulvaney, head of innovation at ESB, said the programme opened up a route to market for the companies involved, and while there was no formal arrangement as to investment prospects, the utility companies were watching with investment as a possibility.

The 12 start-ups selected for the programme have already received a combined total of over €53 million in funding and generated €22 million in revenue.

The ESB has previously invested in clean energy start-ups through its Novus Modus fund, which is no longer actively investing in companies.

Abridged accounts for Climote show a loss in the year to the end of 2015 of €831,145. That represents a 36.3 per cent increase in losses on the previous year. However, the results were said to be in line with the directors’ expectations. “They [directors] are confident that the company will achieve profitability in the future as the company agrees orders with customers.”

The prize money is being funded by eight international utility companies. Aside from ESB, other partners include the Dubai electricity and water authority, the Tokyo electric power company and Singapore power.

More than 450 energy start-ups from 51 countries applied to be part of the accelerator programme, with 12 ultimately being selected. One of the shortlisted companies include an Israeli start-up called Driivz which works with the ESB as platform operator on its e-car exchange point management system.

In order to win the prize money associated with the programme companies must be pilot ready, their offering must reduce greenhouse gases, the idea must be scalable and they must have a management team that can deliver, said Mr Mulvaney.

As part of the programme Climote and the 11 other selected start-ups will participate in three week-long modules in Silicon Valley, Lisbon and Singapore over a six-month period.