Ireland gets set to join the space race 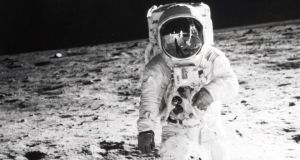 Buzz Aldrin, an American engineer and astronaut, was one of the first two humans to land on the moon. Photograph: Universal History Archive/Universal Images Group via Getty Images

The new film Apollo 11 about the first spaceflight to the moon is due for release in Ireland this coming weekend. It consists solely of high-quality archival footage, without narration nor interviews. Neil Armstrong and Buzz Aldrin stepped onto the moon on July 21st, 1969, and so we are just a few weeks away from the 50th anniversary. The film trailer shows in particular the intensity of the crew as they “suit-up” to prepare for the launch. The immensity of the challenge ahead is written all over their expressions.

As a young engineering undergraduate, I had the extraordinary privilege of meeting Neil Armstrong in person, having a short conversation with him in 1976. He was visiting Ireland to receive an honorary DSc degree from Trinity College Dublin. We chatted over a cup of coffee in the Provosts House, and I recall he expressed interest in visiting the Newgrange passage tomb in the Boyne Valley.

Prof Michael O’Kelly, then head of the department of archaeology at UCC, had rediscovered the illumination of the triple spiral stone at the end recess of the chamber at Newgrange during the winter solstice in 1967. Having cleared the roof box and the surrounding shrubbery and overgrowth, O’Kelly was possibly the first human to see the solstice at Newgrange for several thousand years. I do not know whether Armstrong has ever visited Newgrange, nor whether he has experienced the solstice there.

The neolithic Newgrange, built about 3,200BC, is among the oldest buildings in the world. Subsequently, the Celts are known to have developed a reasonably sophisticated understanding of lunar and solar cycles. Their expertise was first studied in modern times with the rediscovery of the first century Coligny calendar near Lyon in 1897, and then also with subsequent findings. The Greek mathematician Hippolytus (AD170-236) noted that the Celts foretold the future not just using the sun and moon, but also by observing the stars, as did Pythagoreans. However, there is uncertainty whether the Celts were influenced by Pythagoras in cosmological predictions, or vice versa.

Today, there is a strong interest among the Irish public in astronomy, with the Irish Astronomical Society, Astronomy Ireland and the Irish Federation of Astronomical Societies. Astronomical events, space technology and research are actively followed and debated. Eirsat-1, Ireland’s first satellite, has been developed at UCD with support from the European Space Agency (ESA). It should be launched next year.

It is thus timely that the Government has just published the first ever Irish National Space Strategy (available at https://bit.ly/2X5JSUa). Ireland joined ESA in 1975. Our membership entitles Irish companies to bid for tenders awarded by the organisation. ESA has also developed a start-up incubation centre, and a space solutions centre, in conjunction with the Tyndall National Institute in Cork, and in partnership with Athlone Institute of Technology, Maynooth University, and the Centre for Marine and Renewable Energy at UCC.

The National Space Strategy report notes that 67 Irish companies and organisations collaborated with ESA last year. The space sector in Ireland employed 2,000 people in 2014, and this is expected to rise to over 4,500 by next year. Irish start-ups and companies that have collaborated with ESA are together expected to have commercial sales exceeding €100 million next year.

ESA anticipates that the participation by private industry in space exploration and technologies will continue to expand rapidly, and that there will be increasing collaboration between the space and non-space sectors.

ESA is particularly keen that standard components and subsystems, already proven in the non-space sector, can be rapidly adopted for use in space. This should then reduce the very lengthy development and engineering cycles hitherto in the space industry. Shorter development timescales would in turn make it more commercially feasible for smaller companies and venture-backed start-ups to increase their participation in the sector.

The opportunities in the space industry reinforce our own focus on world-class technology, and high-skilled and sustainable employment. They also further strengthen opportunities for international collaboration, and thus to showcase the quality of Irish engineering and scientific research.

One of the most significant agreements with ESA is Irish access to data about our planet collected by Earth observation sensors, both space and terrestrial, via the EU’s Copernicus programme. The National Space Strategy envisages the creation of a space data hub to facilitate access and processing of data from European and third-party space programmes, by academic and commercial partners.

Participation and collaboration in space technology is increasingly open since Apollo 11, now 50 years ago. Private companies can lead where in the past government agencies led. Smaller companies and even start-ups can make valuable contributions alongside the major aerospace giants. Ireland can become deeply involved, and our younger generation could force our way.