‘I realised there was a niche for healthy children’s ketchup’ 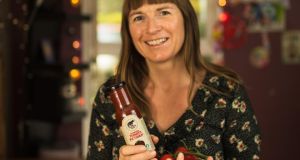 Loretta Kennedy has set up MamaBear Foods, a Cork-based food business with a reduced-sugar ketchup as its launch product.

When kids get a taste for something they often want it with everything. If we’re talking raw carrots, happy days, they can munch to their heart’s content. But if they develop an attachment to foods that contain a lot of fat or sugar that’s a different story. Ketchup is one of those things that kids often love. However, it typically contains a lot of sugar and this is what led mother of three Loretta Kennedy to set up MamaBear Foods, a new Cork-based food business with a reduced-sugar ketchup as its launch product.

MamaBear ketchup will be launched through the SuperValu Food Academy in November and will initially be available in 10 Cork stores and a number of health food outlets in the city. The product has less than half the sugar of regular ketchup and “also contains prebiotics which encourage and support a healthy gut so it is both kind to teeth and kind to tummies”, Mayo-born Kennedy says.

“My kids love ketchup and when I became aware of all the hidden sugars in the food staples I was regularly buying, I began looking for healthier alternatives. When I couldn’t find them, or find ones that my children actually liked, I began making my own. I then did a start-your-own-food-business course through Cork South LEO and began manufacturing my ketchup in an incubator kitchen in Cork which has been an invaluable resource.

“I started selling to farmers’ markets to see if there was any interest in my product and quickly realised there was a niche for a healthy children’s ketchup,” she adds. “I began working with Teagasc on developing the recipe but when I began to scale up production I found it needed some further tweaks and I also wanted to have a full nutritional profile done. Getting my product to launch has been a slow process but I wanted to ensure that the ketchup I put onto the shelves is the best it can be in terms of ingredients, taste and price. My children are my biggest critics and when I come home with a new ketchup or a newer version they will tell me in two seconds whether it passes the test or not!”

MamaBear ketchup has no artificial preservatives, sweeteners, refined sugars or gums and is handmade in small batches. Kennedy is using glass bottles for the product and is keen to reintroduce the old idea of a bottle deposit which is refunded when the bottle is returned. “I really want to ensure that my ketchup bottles don’t end up in landfill,” she says.

Kennedy says there are compelling health reasons for parents to watch the amount of sugar their kids are eating. “Ireland has a rising childhood obesity problem and one of the highest rates in the EU of dental extractions under general anaesthetic in the under-fives,” she says. “My ketchup offers the health-conscious parent and consumer the chance to buy a healthy product similar to what you’d make at home from scratch if you had the time.”

MamaBear has been launched on a tight budget of about €25,000 and Kennedy has continued to work at her day job while developing her business which now employs one person part-time. The company’s breakthrough in revenue-generating terms will be its launch in SuperValu next month. “The first product is a traditional, very tomatoey ketchup with a roasted garlic variety to follow,” Kennedy says. “However, I don’t intend to limit myself to savoury products or to catering for children. I’ve had a lot of interest in the ketchup from health-conscious adults and diabetics, and my next two products will take me into a new market segment as they are nut-free, reduced-sugar chocolate spreads with added functional elements such as vitamin D.”