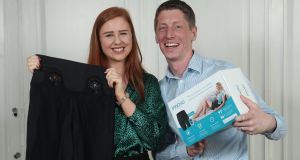 Urinary incontinence affects hundreds of millions of people around the world and often goes untreated and unreported due to the embarrassment involved and the stigma felt by patients. As many as one in three women and one in 10 men suffer from leaks every day, primarily due to weakened pelvic floor muscles caused by pregnancy, menopause, high-impact exercises and pelvic or prostate surgery.

But there is a non-invasive, clinically proven technological solution for many sufferers. Innovo, from Galway company Atlantic Therapeutics, is a wearable device that provides an effective therapy to strengthen the pelvic floor.

The device, which is similar in style and feel to a pair of standard cycling shorts, works by compressing and releasing the pelvic floor 180 time during a half-hour session. This has the effect of strengthening and rebuilding the muscles, helping them retake control of bladder function over a number of weeks.

“The company was founded in 2015 when it spun out of Bio-Medical Research, the company behind Slendertone,” says global product manager Danny Forde. “The technology for Innovo has been around for about 10 years but Bio-Medical Research realised it needed a standalone company with its own management structure solely focused on it to realise its potential.”

The embarrassment factor is one of the main issues to be addressed, he adds. “A certain percentage of sufferers speak to a clinician but quite a few are too embarrassed. This is a major problem. Sufferers try to manage it themselves by buying pads week in, week out. There are treat ments like surgery, but these can have side effects. Pelvic-floor exercises can take a long time to have any effect and many people give up.”

There are also social consequences. “When you look at a group like a Zumba class you will see a certain number of participants stepping out of some sections as they feel they may not be able for them due to incontinence problems,” says Forde. “The Innovo will help them deal with those problems and give them the confidence to participate fully.”

The company raised €15 million in a series A funding round in 2017. This was used for further development work on the innovation. “We evolved the technology from a wrap-based approach to a wearable,” says Forde. “It now looks like a pair of cycling shorts which can be worn very comfortably by the user.”

A pilot study on Innovo found that after four weeks of treatment, 93 per cent of research participants found a significant improvement to the amount of involuntary urine leakage, and after 12 weeks, 86 per cent were defined as dry or almost dry.

In late 2018, Atlantic Therapeutics received de-novo approval from the US Food and Drug Administration (FDA) for the device, enabling the company to launch the device onto the US market earlier this year.

“There are two routes to access the US market,” Forde says. “You can point to a similar device and demonstrate yours is similar or, if it is considered novel, you demonstrate its safety and efficacy through randomised clinical trials to get de-novo approval. The trials, which involved 180 women, found 87 per cent were dry within four weeks and 90 per cent had achieved the FDA quality of life improvement threshold after 12 weeks.”

Building on this success, the company has just closed a €28 million series B round. “This is the largest fundraising round by any Irish company this year,” Forde notes.

“Business is very, very healthy,” he says. “It’s a prescription-only device in the US at the moment and our aim is to achieve over- the-counter status this year. We are also up and running in a number of European markets including the UK, France, Germany, Spain and Ireland for a number of years and we recently finalised a distribution deal in Saudi Arabia. Our primary sales channel is ecommerce. We want people to be able to purchase the product directly and avail of its benefits as quickly and easily as possible.”

Further innovation is planned. “We also have a healthy product pipeline looking at all types of incontinence. We want to help people achieve better pelvic health which will help their confidence and quality of life. Our focus is on realising the product’s potential in the US. After that, we will look at other markets including China and Japan. ”