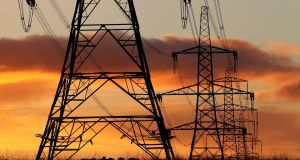 Academic researchers and companies such as ESB Networks have been working on developing ways to feed renewable power back into the national grid. Photograph: Andrew Milligan/PA Wire

It is difficult to imagine it now but rural parts of Ireland underwent a technological revolution when electricity was finally delivered to people’s front doors in the 1950s. We can get an impression by watching the grainy, scratchy-sounding news reels showing people plugging in a kettle or a heater or switching on a light rather than an oil lamp or candle. Scepticism gave way to ready acceptance for the most part, opening a path for what would follow – several generations worth of research and innovation that delivered products and services that would have been impossible to imagine for those suddenly able to throw a switch to get warm.

Wind the clock forward and we are at it again. History has repeated itself with rural communities once again awaiting the arrival of advanced technology, this time in the form of a dependable high-speed broadband service. Urban areas have been wired up for years but business people away from population centres struggle to participate in ecommerce. The Government regularly issues statements on how well the delivery of fibre broadband is going but this has not stopped the complaints of communities where this magic “new” technology has yet to land.

Of course there are constraints, mainly the cost of high-speed cabling – fibre – and on where the high speed connections will land next. But either we are going to provide these services or we are not. Stop telling country dwellers about how great it will be when it arrives – just deliver it.

The convolution of cost and geography – the longer the cable run the more it costs – was there in the 1950s and it is there for broadband, but there is one area where those living in the country might have an advantage – running your own private power station. Researchers have been looking for some time at using small windmills and solar panels to collect electricity that can be stored in batteries. These can be used to charge up the electric car and provide water and space heating with any supplementation needed coming from the existing ESB supply. Potentially, any surplus left in the battery at night could theoretically be sold back to the ESB, in the process reducing electricity costs for the home owner.

Could this really work? Maybe. It just depends on achieving agreement from all parties, from the homeowner to the power supply company and including the Government. Much of the necessary technology is already there, but one complexity to be sorted out is so called “smart metering”, power metering that allows electricity to flow in either direction and makes it possible to deliver power back into the distribution grid in a form it can use.

Academic researchers and companies such as ESB Networks, the people who run the grid to deliver power to our front door, have been working for years on developing ways to feed renewable power back into the national grid without disrupting the overall balance of the system. This is way more difficult than it might seem on paper and has been a challenge when trying to integrate intermittent wind-power resources with the grid.

Last week ESB Networks launched its “innovation strategy” with plans to spend more on research and the development of technology to develop truly smart metering and distribution technologies that take account of the individual consumer/supplier of electricity.

It presented eight road maps that will focus, among other things, on connecting more renewable sources, increase power demand for transport and home heating and developing a grid that in its entirety can be considered to be “smart”.

It describes plans to undertake “a whole suite of smart network research projects and trials”, but this one pulled me up short. ESB Networks has already been involved in this for years. So too have academic researchers in a wide range of areas from IT through engineering, physics, new materials, etc. You can also add in the dozens of companies that have formed, seeking to exploit the delivery of products and services to control heat, light and other services in the home either remotely via the internet or from a single location.

This is already a busy research hub and marketplace and maybe it is time to pull the various strands together and develop some kind of coherent national policy on how it should grow and develop. Rapid application of all of these various powersaving technologies provides a national benefit in helping us to lower electricity demand and therefore carbon output and may help us get closer to the strictures set by the Paris Agreement on climate change.

The Government should consider some kind of initiative where resources could be pooled to increase the level of self-generation and integration of systems, as opposed to leaving the various players to eke out a living but greatly reducing the overall impact of what we might achieve if we pooled resources.