The airline has pulled Max aircraft up to August 19th 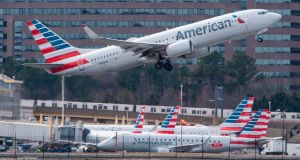 American Airlines Group is the second major US carrier to pull the grounded Boeing 737 Max from its summer schedule. Photograph: Andrew Caballero-Reynolds/Getty Images

American Airlines Group has become the second major US carrier to pull the grounded Boeing 737 Max from its flight schedule through the busy summer season, saying the decision would give passengers more certainty in making holiday plans.

The airline is pulling the Max through August 19th, chief executive Doug Parker and president Robert Isom told the airline’s employees in a statement on Sunday.

Southwest Airlines last week removed the Max from its schedule through August 5th. The action will increase daily cancellations for American to 115 from about 90.

The Max was grounded on March 13th after a second fatal crash involving the aircraft in five months. Boeing is working on proposed software updates that would prevent the repeated triggering of a system that can drive the plane’s nose down. US safety regulators have to approve the fix and decide on new training for pilots.

“Based upon our ongoing work with the Federal Aviation Administration and Boeing, we are highly confident that the Max will be recertified prior to this time,” the executives said, referring to the August 19th date. They said if that occurred American’s 24 Max aircraft would serve as spare aircraft to supplement operations over the summer.

United Continental is the third US carrier that operates the Max. – Bloomberg