The brave new world of the ‘unconference’ won’t include me

Staid panels have been disrupted by agenda-free events, but freedom comes with risks 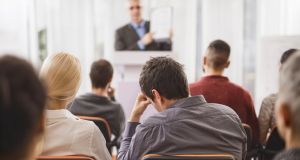 I have certainly been to gabfests where I have been bored to a semi-coma by a parade of dull speakers. Photograph: Getty

From time to time, the business world comes up with an idea so baffling it is hard to believe anyone takes it seriously.

I came across one last week when I opened an email about an “unconference”, an industry gathering with no set schedule or speakers, where discussions are decided by whoever turns up on the day in a rush of unscripted, unfiltered unpredictability.

How unbelievably unappealing, I thought, as I read about Johan Jorgensen, founder of a tech unconference called Sweden Demo Day that started in a Stockholm basement in 2010 and now packs in people by the thousand.

“This is about tearing down boundaries for meetings between people,” Jorgensen told Sifted, a site that covers European start-ups. “We had speakers for two years running before we realised it was completely pointless,” he added, explaining the speakers were mostly known to attendees, who in any case had come chiefly to talk to each other.

The idea that an audience has more collective expertise than a few people on a stage underpins the world of the unconference, which turns out to have spread beyond tech circles to places as unlikely as the upper reaches of the British civil service.

“Getting away from ‘speakers’ and ‘listeners’ is very powerful and much more likely to get the best value out of the day,” according to senior civil servant Clare Moriarty, an unconference fan who used to run the UK’s environment department until she switched to the Department for Exiting the European Union.

But is it really? I can see why the unconference might work for a scrappy start-up founder seeking an investor more than a speech. I get the idea that a lot of people only go to conferences for the corridor talk, so why not make the whole thing a corridor? And I have certainly been to gabfests where I have been bored to a semi-coma by a parade of dull, poorly moderated speakers, in a room that only comes to life when people in the audience ask questions.

I have inflicted some of this horror myself. At one event last year where I was chairing a panel of bankers, even the speakers were so bored that one pulled out his phone and started to check his emails on stage.

Yet the unconference still seems an overreaction. Instead of a planned agenda, they often begin with a pitching process where anyone present can propose a session. This is hopeless. A pre-planned schedule is not a tool of oppression but liberation: it frees you to decide if an event is worth going to. Who has time to take a punt on whether interesting people will turn up or not?

Another risk of the DIY agenda is that the loudest people take over, regardless of the strength of their pitches. But the greater threat is a polite mush of consensual agreement.

This goes to the heart of the reason so many business conferences fail. It is not because they have rigid agendas or presenters talking down to a passive crowd. It is because they are full of speakers who violently agree with each other, or are too timid to say anything interesting.

Twitter has no doubt made things worse. Not that long ago, conference speakers could say what they liked with no fear of igniting an online storm. Yet social media can also amplify the successes of conventional events. One of the great recent conference moments came at this year’s gathering of the global elite in Davos, where a young Dutch historian, Rutger Bregman, galvanised proceedings by asking why there was so much talk of inequality and so little about the rich paying their fair share of taxes. I suppose this could happen at an unconference, though as one New Zealand unconference network has put it, these events offer a chance for “collaboration and sharing”. A full-throated dust-up seems unlikely.

Speaking of which, in a former life I went to a lot of energy industry conferences. Those I remember best were like the one in London where a climate activist appeared on the same panel as an oil company executive who grew so indignant at the idea of curbing fossil fuels that he stormed off the stage in a rage. It was riveting, revealing and slightly alarming to watch. And I would always prefer it to a room full of cheerful agreement. – Copyright The Financial Times Limited 2019

9 Stocktake: Risk of market correction appears to be rising