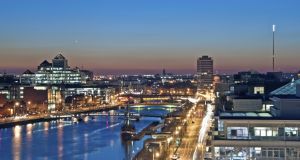 Dublin-based funds have seen £42 billion of net inflows from the UK since June 2016.

As much as £62 billion (€72 billion) in capital has been moved to offshore funds by UK investors since the Brexit referendum nearly two years ago, with Dublin has the biggest winner, taking two-thirds of the total.

“Dublin and Luxembourg have been the real winners from the UK’s decision to quit the EU. Before the Brexit referendum, there was relatively busy two-way trade in offshore funds, but the net amount that flowed offshore was extremely small,” said Edward Glyn, Calastone’s head of global markets.

“Since June 2016, the picture has changed completely as a wall of investor money has fled from the UK to Dublin and Luxembourg, where it will remain inside the EU’s regulatory jurisdiction once the UK leaves the union,” he added.

Flows offshore have been across all asset types, Calastone said, reinforcing the notion that it is the choice of jurisdiction inside the EU and outside the UK that is the key determinant, rather than the investment propositions available.

Last month, as the UK edged closer towards a no-deal Brexit following the failure of prime minister Theresa May to win acceptance for her plan, investors placed a net £2.7 billion (€3.1 billion) in EU-based funds, almost three times the amount that flowed into UK regulated funds.

In the past six months, some £9.5 billion (€11 billion) in capital flowed into offshore funds, as against £7.5 billion (€8.7 billion) that went into UK-domiciled ones.

Calastone, a London-based investment funds transaction network, said it arrived at its figures after analysing over a million buy and sell orders every month from January 2015, tracking monies from independent financial advisers, platforms and institutions as they flow into and out of investment funds.

The fintech, which processes over nine million messages and £170 billion (€197 billion) of transactions every month, has 1,800 customers in 40 countries and territories.

1 More than 40% of help-to-buy recipients already had deposit
2 Owner of Dundrum Town Centre to sell prized assets
3 Most workers now expect ability to work from home part-time
4 Help-to-Buy bonus; a taste for working from home; and two landmark deals
5 Stocktake: Is the shoeshine indicator flashing red for stocks?
6 Elderly parents living in property you own will save you on capital gains tax
7 56 financial firms entered or expanded Irish operations in 2020
8 Microsoft to press on with TikTok deal after call with Trump
9 Law governing construction pay rates remains pending State appeal
10 Pilita Clark: Working from home is starting to pall
Real news has value SUBSCRIBE