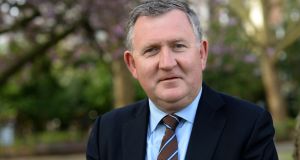 Uniphar’s Ger Rabbette: he said the group had “transformed” over the past five years. Photograph: Dara Mac Dónaill

Uniphar, the Irish pharmaceuticals wholesaler and healthcare services group chaired by Maurice Pratt, plans to double its earnings over the next five years to nearly €100 million after a planned stock market flotation next month.

The company confirmed on Monday that it would be seeking to raise €150 million in an initial public offering (IPO) and list on the junior Dublin and London markets.

The Irish Times reported the figure in April as the company had begun to market the IPO with its advisers in Davy and Royal Bank of Canada.

Uniphar, formed in 1994 through the merger of United Pharmacists Co-op and Allied Pharmaceutical Distributors, will use some of the IPO proceeds to pay the up-front consideration and related costs to complete the purchase of Durbin, a specialist supplier of pharmaceuticals with offices in the UK and the US. A spokesman for the firm declined to give financial details on the deal.

The cash will also be used for further bolt-on acquisitions, capital expenditure and working capital for growth of the enlarged group, to reduce the group’s debt burden and pay IPO expenses.

Uniphar made over two-thirds of its €46.3 million of earnings before interest, tax, depreciation and amortisation (ebitda) last year from its two growth divisions.

These are commercial and clinical, which helps pharmaceutical companies and medical device manufacturers with marketing and distribution, and product access, which sources and supplies unlicensed medicines for retail and hospital pharmacy customers and manages the release of speciality medicines for drug-makers to approved patients.

Chief executive Ger Rabbette said the group had “transformed” over the past five years, and was “poised to become a truly global provider of integrated solutions with a strong focus on speciality pharmaceuticals and innovative medtech portfolios while maintaining our leading supply chain and retail position in the Irish market”.

Mr Pratt told the company’s 500-plus existing shareholders, mainly independent community pharmacists, last December that the group had more than doubled its ebitda in 2018, following over €150 million of acquisitions since 2012.

In the second half of last year Uniphar completed the purchase of the healthcare distribution unit of construction-to-property investment company Sisk Group in a deal involving cash payments of up to €65 million over a two-year period and the transfer of a 15 per cent stake in the business.

Uniphar invested heavily in retail before the financial crisis. It was forced to take a €98 million writedown on its investment in scores of pharmacies in 2008.

Mr Pratt, the former head of Tesco in Ireland and drinks maker C&C Group, came on board as group chairman a decade ago, with Ger Rabbette being hired as chief executive the following year.

An IPO will complete a significant turnaround since 2010, when a series of cuts by the HSE to the prices it was prepared to pay for medicines hit the company and led to large-scale restructuring.

In 2013, it acquired Cahill May Roberts in Ireland, which gave it the scale to compete and absorb the HSE-imposed cuts.

The company also began moving outside Ireland, expanding into Britain in 2015 and into the Benelux region in February of last year.

1 How long can Government afford to keep State pension age at 66?
2 Policy failed us during the banking crisis and it’s failing us again
3 No-deal Brexit could trigger rise in food prices, says Simon Coveney
4 In praise of Gogglebox Ireland, an essential service in all but name
5 Aryzta to pursue asset sales as takeover talks fail
6 ‘Brexit readiness’ tool launched for Irish business amid trade talks impasse
7 Samsung patriarch Lee Kun-hee dies at 78
8 Retailers accused of ‘stealing business’ from rivals by flouting restrictions
9 Irish consumers pessimistic about cost of living despite fall in prices
10 Fair deal? Family at odds with hospital and each other not so sure
Real news has value SUBSCRIBE