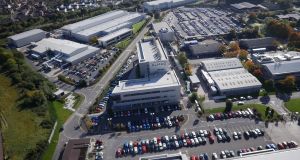 The profit at the privately-owned group fell to £27 million from £33 million the previous year despite a 3 per cent rise in sales. Profit in 2017 had benefitted from upfront and other payments relating to the “out-licensing of oncology products”.

Almac was first established in 2002 by Sir Allen McClay. He formed the busienss by investing around £240 million to acquire four service-based businesses from Galen Holdings Plc, which he had originally founded as Galen Ltd in 1968.

Sir Allen died in 2010, but his legacy lives on in the McClay Foundation which is the controlling shareholder in the Almac Group.

During its last financial year the group, which has 17 operations across Europe, the US and Asia, continued to make significant investments in Northern Ireland and the Republic.

It earmarked a £20 million investment in a new 95,000 sq ft custom-built cold store facility, one of the largest in Europe, at its global headquarters in Craigavon which will create 100 jobs. It also acquired Athlone-based BioClin Laboratories and committed to a “multimillion pound expansion” at its Arran Chemical Company, also based in Athlone.

Almac was one of the first businesses north of the Border to publicly detail its Brexit preparations when it established a new European campus in Dundalk – just 40 minutes by road from its Craigavon headquarters – in 2017.

At the time the group said it was investing in the site as part “of its ongoing global expansion strategy and to address any potential challenges that may arise due to Brexit”.

During its most recent financial period Almac committed £30 million to an additional investment programme at its European campus which it said would help to “ensure an uninterrupted service provision through any uncertainty Brexit may bring”.

According to Alan Armstrong, group chief executive, Almac had “yet another strong year in 2018” overall, growing its total workforce by 8 per cent to 4,798.

“We made significant progress on our ambitious growth strategy with the acquisition of BioClin Laboratories and the continued investment in our existing global facilities, in addition to increased headcount.

“With 100 per cent of our profits reinvested into the business we will continue to innovate and improve our wide range of services and products to ensure we provide the premium solutions our global client base relies on,” Mr Armstrong said.