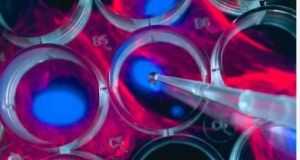 “While there’s been significant progress in treating solid tumour cancers overall with targeted therapies, patients with the KRAS G12C mutation have not benefited from these advances.” Photograph: Getty Images

Amgen, the world’s largest biotech company, has discovered a drug to target a supposedly “undruggable” gene mutation, potentially paving the way for a new cancer treatment.

The California-based biotech company presented very early data on its research into drugging the protein made by the KRAS gene – a mutation of which is found in many cancers including lung and colorectal – at the American Society for Clinical Oncology on Monday.

Greg Friberg, Amgen’s vice-president of global oncology development, said researchers had been studying KRAS for decades because it was one of the master switches that turned a cell cancerous, known as an oncogene.

“The mutations allow [cancerous cells] to survive in the face of stresses, to not follow the rules, to not die when they’re supposed to and to become immortal,’ he said. “That’s what a cancer is: your cells become immortal.”

Researchers had struggled for years to find a way to hook a drug on to the KRAS protein because it is round like a tennis ball. By using X-ray crystallography – which Dr Friberg describes as a kind of “Polaroid for the microscopic environment” – Amgen’s team had found a secret groove that they could then search for a drug to target.

The drug targets only one of the rarer types of KRAS mutation, G12C, which is found in 14 per cent of non-small cell lung cancers and 2 to 5 per cent of other tumour types.

The phase 1 study is a very early look at whether the drug will work in patients who have tumours with the specific KRAS mutation.

Dr Marwan Fakih, a professor at the department of medical oncology and therapeutics research at the City of Hope, a clinical research centre in California, who presented the study at Asco, said he hoped that after further investigation the drug would help patients.

“While there’s been significant progress in treating solid tumour cancers overall with targeted therapies, patients with the KRAS G12C mutation have not benefited from these advances.”

Geoffrey Porges, an analyst at SVB Leerink, estimated that the drug had about a 35 per cent probability of success in lung cancer patients.

He said it could generate $2.3 billion in total revenue by 2028, a forecast which pushed him to slightly increase his price target for Amgen, from $185 to $187 a share. – Copyright The Financial Times Limited 2019