Drug-labelling company Central Pharma will open facility beside IT Tralee 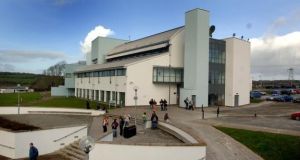 IT Tralee: the new pharma labelling facility will be nearby

Tralee is to get up to 100 new jobs as a pharmaceutical labelling and packaging company opens a facility in the town, the IDA announced on Monday.

Central Pharma, a UK-based company involved in accredited packaging relating to medicines and controlled drug usage, will take over a vacant premises beside IT Tralee’s campus.

Speaking at Monday’s announcement, Central Pharma’s chief executive, Alwyn Smit, said Brexit, as well as the location of the advanced unit alongside a third-level college, influenced the decision to locate in Tralee.

“Post Brexit, Ireland offers a stable environment from which to service our European customer base. We are very excited to establish a best-in-class operation here as a part of IT Tralee,” Mr Smit said.

“The fact that IT Tralee has a Stem [science, technology, engineering and mathematics] faculty played a major role in our decision to come here, as did the availability of the property itself ,” she said.

The private company, with a centre of excellence headquartered in Bedford in the UK, is the leading outsource partner to the world’s top pharma and nutraceutical companies.

Commenting on the investment, IDA chief executive Martin Shanahan said: “The project is a significant investment for Tralee, Kerry and the southwest region, which will benefit the local economy and create a substantial number of jobs. It will add significantly to the life-sciences cluster in the region and act as an excellent reference seller for IDA for further investment into the region,”

Mr Shanahan also said the availability of the facility was key to Central Pharma’s move and had “proved the value of IDA Ireland creating advance technology buildings and advance office buildings in regional locations to attract foreign direct investment”.