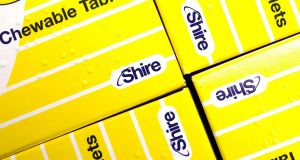 Shire shares surged following a report that Allergan is considering a bid for the drugmaker to compete with Takeda Pharmaceutical’s $60 billion (€48,5 billion) offer.

Earlier on Thursday, Takeda said it offered had £46.50 (€53.46) a share in cash and stock last week for Shire in a bid to extend its global reach. Shire said its board and advisers found the offer “significantly undervalue the company and Shire’s growth prospects and pipeline,” though it’s willing to keep negotiating.

Allergan would face several obstacles to get a deal done. The company had about $30.1 billion in debt and $6.45 billion in cash at the end of the year, and in February, Allergan chief executive officer Brent Saunders said the company had bought back $15 billion in stock while instituting a dividend and paying down some of the debt.

A spokeswoman for Allergan declined comment. In March, Mr Saunders told investors at a conference that the company was “open for business, if you will, in terms of relooking at everything.”

Takeda would need to raise large amounts of capital to buy Shire, which has a bigger market valuation than the Japanese drugmaker. It offered £46.50 pounds per Shire share on April 12, 62 per cent of which would be in new Takeda stock.

Takeda has been ramping up its takeover ambitions under chief executive officer Christophe Weber, as the company seeks growth overseas amid patent expirations and a shrinking domestic population. Shire would bring new assets in gastrointestinal diseases and nervous-system ailments, and key treatments in the late stages of testing.

Under British takeover rules, Takeda had until next week to make an offer or walk away, after it initially expressed interest in Shire last month. Regardless of the outcome of the talks, Takeda said it remains “well-positioned to continue its transformation, delivering portfolio growth while strengthening its pipeline and boosting profitability.”

“Takeda and its board reiterate that it will remain disciplined with respect to the terms of any such offer,” the company’s statement said. Takeda suggested it wouldn’t go hostile, seeking instead the unanimous backing of Shire’s board.

The most recent bid is a 51 per cent premium to Shire’s closing price on March 27th, the day before Takeda confirmed its interest. Shares of Lexington, Massachusetts-based Shire surged as much as 12 per cent in London, where they’re listed.

“We think that Takeda’s recently expressed interest in Shire may flush out other potential bidders, most likely among the US pharma heavyweights including Pfizer, Amgen and AbbVie,” analysts at United First Partners said in a note.

The latest proposal, made last week, comes amid a flurry of transactions in the pharmaceutical sector, marked by GlaxoSmithKline’s $13 billion agreement last month to buy out Novartis AG’s stake in the two companies’ consumer-health joint venture.

Just this week, Merck KGaA agreed to sell its over-the-counter unit to Procter and Gamble for $4.2 billion, Sanofi said it would sell its European generic-drug business to buyout firm Advent International Corp. and Shire agreed to sell its cancer unit to France’s Servier SAS for $2.4 billion.

Takeda’s largest purchase to date was a $13.7 billion takeover of Nycomed A/S in 2011. Last year, the company expanded its footprint in the U.S. oncology market with the $4.7 billion purchase of Ariad Pharmaceuticals Inc.

“Where there’s a will there’s a way,” said John Schroer, sector head of U.S. health care at Allianz Global Investors. “If they really want to force this, they can get this done. But it’s going to require a tremendous amount of leverage.”

1 Who are Ireland’s 17 billionaires?
2 Ireland has fifth-largest number of billionaires per capita in the world, says Oxfam
3 Profits rise at JPMorgan Chase and Citigroup but slump at Wells Fargo
4 Why has the pension age question suddenly become an election issue?
5 Apple played key role in making ‘Ireland tech capital of Europe’
6 Builders finish over 21,000 homes in State during 2019
7 How to . . . keep your kids safe playing Fortnite
8 Clanwilliam Health reports €23.3m loss as revenues rise
9 Court approves debt for equity swap insolvency arrangement
10 European markets slip back ahead of crunch ECB meeting
Real news has value SUBSCRIBE