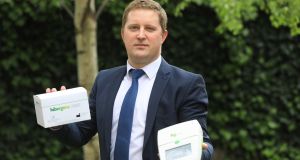 Irish company HiberGene Diagnostics has secured European approval for a highly accurate, low-cost, rapid test for coronavirus, reports Dominic Coyle. The test promises to deliver results for patients who have the Covid-19 virus within 30 minutes.

In terms of both speed and reliability, the rapid Covid-19 test is significant in a global context, writes science editor Kevin O’Sullivan, in his analysis.

Joe Brennan reports on how new documents reveal Denis O’Brien’s Digicel phone group had a $4.2 billion (€3.8 billion) deficit on its balance sheet before it turned to bondholders in recent months to ask them to write off much of what they are owed.

It comes as new figures show Irish consumer sentiment bounced back in May but remained within the lowest 5 per cent of readings in the survey’s 24-year history.

Staying with the retail world, Facebook is hoping that its 2.6 billion users will begin shopping on its platform, as it unveiled a service that puts it in direct competition with Amazon and eBay.

Powering all that online retailing are the data centres and these are helping to prop up electricity demand in the Republic. Barry O’Halloran reviews the latest annual report from Eirgrid, the State company responsible for the electricity grids in the Republic and Northern Ireland.

The European Commission is to propose a recovery fund of more than a trillion euro, including a mix of grants and loans, its executive vice president Valdis Dombrovskis said after finance ministers met over video conference, reports Naomi O’Leary.

In her analysis of the joint Franco-German plan for a recovery fund to dig Europe out of the economic crash Naomi writes that some believe it will be Europe’s “hamiltonian moment”, and constitutes a major breakthrough for the bloc.

In his column, Eoin Burke-Kennedy describes the Goldilocks problem of housing: it’s never just right. He says we’re about to get “the housing market we’ve always wanted. The only problem is, we’ve had to crash the economy to get it.”

Finally, in our commercial property coverage, Ronald Quinlan reports that the developer of the former DIT Kevin St campus has submitted what is being billed as a ‘pandemic proofed’ plan for the site. Meanwhile, property expert James Quinlan argues that the future of the retail sector will be out of town and increasingly online.