Number of people with health insurance increases by 8.1% 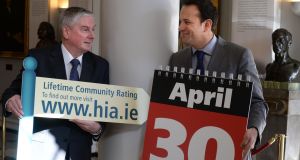 Former minister for health Leo Varadkar TD with Don Gallagher, CEO of the Health Insurance Authority at the launch of the Lifetime Community Rating in 2015. Photograph: Dara Mac Dónaill

The number of people with private health insurance from the three open membership health insurers increased by 152,397 in the two years to January 1st 2017, according to data from the Health Insurance Authority (HIA).

It suggests that the increase is due to the dual impacts of economic recovery and the effects of the introduction of the lifetime community rating (LCR).

The LCR was introduced by Leo Varadkar TD, who was minister for health in 2015. The aim of the initiative was to introduce an age-related loading to health insurance premium for those taking out private health insurance for the first time after the age of 34.

The age category that noted the biggest increase of people with health insurance was for those aged between 40 and 49. An 11 per cent increase was reported in that category.

The three open membership health insurers – VHI, Irish Life Health and Laya Healthcare -  had a total of 2.03 million people insured as of the start of this year, an increase of 8.1 per cent on the same date in 2015.

That figure does not include individuals who are excluded from accessing some treatments because they are in a waiting period for pre-existing conditions.

The number of insured people paying a LCR loading was 15,132 at the start of this year. That’s an increase of 64 per cent on the same date in 2016. 77 per cent of those paying loadings under the current arrangement are between the age of 34 and 49. Last year €2.4 million was paid in LCR loadings. The average number of insured persons paying loadings last year was 10,260 people, which would suggest that the average LCR payment was €233.90.

“The sustainability of the market, and the overall affordability of premiums, is supported by the increase in the total number insured and the younger average age of those insured. Our community rated system requires a steady flow of new and younger lives becoming insured”, said Don Gallagher, HIA chief executive.

“The increase in the numbers insured under 50 years of age is very welcome as this is a key target group for lifetime community rating”, he added.

The HIA is currently conducting a review of the operation of lifetime community rating at the instruction of  Minister for Health Simon Harris.