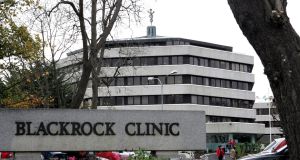 Flynn used his company Benray to buy a stake in Blackrock Clinic in 2006. Photograph: Cyril Byrne

Mr Goodman’s Breccia recently won a court battle with Mr Flynn and his company, Benray, for control of the Dublin private hospital.

Receiver Michael McAteer of Grant Thornton is advertising a “minority shareholding in a Dublin private hospital” that belongs to Benray Ltd for sale in The Irish Times today.

Mr Flynn used Benray to buy a stake in Blackrock Clinic in 2006. Breccia, which invested in the hospital in the same year, appointed Mr McAteer as receiver in August 2014 after acquiring Benray’s debts from State assets agency Nama.

Benray originally borrowed the money to buy its stake in Blackrock from the now defunct Anglo Irish Bank, and those debts subsequently passed to Nama.

The €8.7 million liability was secured on Benray’s shares in the hospital. When Breccia bought the debt, it acquired the right to seek its repayment or take control of the Blackrock Clinic stake.

Breccia demanded payment of the loan on August 8th, 2014, and appointed Mr McAteer three days later, after Benray failed to repay the debt. It also sought repayment from Mr Flynn under a personal guarantee.

The Supreme Court recently found that Breccia validly acquired the debt in the first place, that Benray defaulted on its obligation to repay the loan and that Mr McAteer was validly appointed.

Mr Flynn and Benray challenged Breccia’s move, claiming Mr Goodman’s company had broken a 2006 shareholders’ agreement, which obliged it to act in good faith towards the other investors in the hospital.

While it won its case in the High Court, it lost in the Supreme Court, which recently ruled that Breccia was entitled to an €8.7 million judgment against Benray and Mr Flynn. The court also found that Mr McAteer was entitled to sell the shares.

In a separate case, the court ruled that Blackrock Clinic founder, Dr Joseph Sheehan, could redeem his loans for €16.9 million, and not €20 million, the figure that Breccia sought.