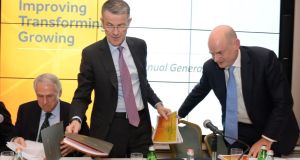 US tax cuts from president Donald Trump have fuelled demand for Irish-headquartered UDG Healthcare’s services to grow, the company said.

Chief executive Brendan McAtamney told The Irish Times the proposed tax benefits had fuelled investment, which has led to increased spending on additional services such as those offered by UDG. “The market is in benign good health,” he said, referring to the US market, which this year will account for 60 per cent of UDG’s profits.

Mr McAtamney was speaking after the company’s annual general meeting at the Westbury Hotel in Dublin on Tuesday. All resolutions at the agm were passed, including the decision to increase Mr McAtamney’s remuneration by 12 per cent to €2.24 million.

“If you look at the comparisons I think it is at market [level]. But it’s ultimately a decision for the chairman and the remuneration committee and our shareholders have backed our remuneration policy, so I’m pretty comfortable with it,” he said.

Asked about the effect of Brexit, company chairman Peter Gray told shareholders that UDG, formerly known as United Drug, did not see the UK’s decision as having a “major impact”. “When we examine the businesses we’re in at the current time we do not see a significant risk even in the case of a hard Brexit, but we do not know,” he added.

In a trading update earlier in the day the company, which is divided into three divisions, said it made a good start to the financial year, as acquisitions helped boost its pretax profit.

UDG noted profit before tax for the quarter ended December 31st, 2017, was “well ahead” of the same period a year earlier.

Underlying growth and acquisitions helped drive profit at the company’s Ashfield unit, with Sellxpert, Vynamic, Cambridge BioMarketing and MicroMass Communications deals all completed during the second half of 2017. UDG said the new purchases were performing in line with expectations.

Meanwhile, Sharp’s operating profit lagged behind due to unusually high churn in the US commercial business during the second half of fiscal year 2017, which then carried through into the first quarter of 2018. Although Sharp Europe was profitable in the first quarter, the business was also hit by disrupted manufacturing schedules as the damage caused by the hurricane in September 2017 affected a number of its clients. But the group said it expected the performance of the US business to improve in the second half of its 2018 fiscal year, fuelled by an improving business activity pipeline.

The group predicted earnings per share on a constant currency basis to be up to 21 per cent ahead of last year’s EPS of 37.1 cent.

UDG’s final dividend of 9.72 cent will be paid to shareholders no later than February 5th.