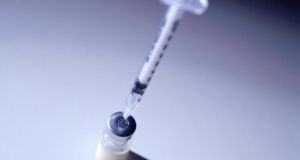 Biotech fever is spreading to Europe from the United States with a successful stock market debut for a cat allergy company in Britain seen as a bellwether that could help unlock listings in other countries including Switzerland and France.

Top candidates for a share sale include Swiss firms AC Immune and Molecular Partners, which are both weighing up a possible initial public offering (IPO), according to people familiar with the companies.

Sentiment was given a major boost today when British allergy drug development firm Circassia raised around £581 million in its London listing, a record-breaking sum for a European biotech.

“The market is receptive to good companies that have got a well thought out story,” Circassia chief executive Steve Harris told Reuters. “I don’t know that there will be a lot, but I’m sure there are a number of other good quality companies that will come to market in Europe.”

With the IPO window nudging open, companies that in the past might have opted for a trade sale to larger pharmaceutical companies are now considering a share listing instead.

“There is growing noise suggesting the IPO market is opening up in Europe and, in fact, it would be surprising if it didn’t. There is normally a lag of about a year from the U.S. taking off and Europe following,” said Francesco De Rubertis, a leading biotech investor at Index Ventures in London.

Biotech shares have surged in the United States since 2011 as advances in the understanding of the genetic basis of disease, enthusiasm for a clutch of new drugs in cancer and hepatitis C and new US rules to speed up the development of innovative medicines whet investors’ appetite.

That, in turn, has fuelled a surge in US biotech IPOs, which really started to take off at the end of 2012, and dozens of firms have since raised money by listing.

The United States is home to the world’s leading biotech companies, resulting in an experienced pool of specialised US funds with a deep understanding of the sector’s complexities and long development timelines.

By contrast, firms raising money in Europe rely more heavily on generalist and small-cap investment funds, many of which have traditionally had little appetite for early-stage biotech businesses, making Europe a tougher place to raise funds.

Many European investors have unhappy memories of past biotech failures, most notably the high-profile rise and fall of British Biotech, an experimental cancer drug business, back in the 1990s.

The lack of enthusiasm up till now has prompted several European companies to jump ship and seek a listing on the Nasdaq market in New York, where they can tap a deeper pool of experienced biotech investment capital.

Britain’s Lombard Medical was the latest to plan to go this week, following on the heels of others including Dutch gene therapy pioneer UniQure and UK diagnostics firm Oxford Immunotec.

The strong backing for Circassia’s London listing signals bullish sentiment is starting to take root on this side of the Atlantic. In a further sign that funding in the sector is taking off, Vectura also raised about £52 million in a share placing on today.

This will be pleasing for some European firms for whom a US listing could be a risky and costly endeavour, particularly if they lack a strong US presence.

“In Europe, an IPO is still one of the highlights in a company’s life whereas in the US it’s one of the easiest ways to get access to new money without debating valuation and board seats and so on. There doing an IPO is a financing act,” said Juerg Zuercher, a life-science specialist at Ernst & Young.

A trickle of smaller IPOs is already underway in France.

Crossject, the maker of a needle-free injection system, raised €17 million on Paris’ Alternext exchange last month, while Oncodesign, which helps companies assess the therapeutic potential of cancer drugs, aims to raise between €37.5 and €42.9 million on the Euronext.

Genomic Vision, a maker of molecular diagnostic tests to detect genetic disorders, and cancer vaccine maker Genticel have also signalled their intention to float on the Euronext.

Still, European investors, bruised by a series of booms and busts in this notoriously volatile sector, are likely to be pickier than their US peers when it comes to backing firms.

Hanspeter Gehrer, head of corporate finance at Swiss bank Vontobel, expects a limited number of biotech IPOs in Switzerland this year, saying firms would need to offer a free float of at least 100 to 150 million Swiss francs ($114 to $172 million) to get investors on board.

“In the current environment, investors are not prepared to take too big a bet. That means that firms must be close to generating cash flows and profits,” he said.

AC Immune’s decision on whether to opt for an IPO will likely hinge on Phase II data, expected in the second quarter, for its Alzheimer’s drug crenezumab, which it licensed to Roche subsidiary Genentech in 2006.

In a statement, AC Immune said an IPO was only one option.

Swiss media have also touted Polyphor, which is developing antibiotics, as a candidate after its chairman said in an interview last year his aim was to take the company public “some day”, and signalled it may even fulfil the criteria in 2014.