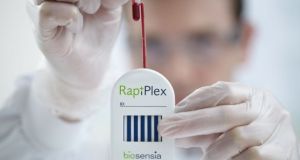 Biosensia was founded in Dublin in 2009

US medical diagnostics company Kypha has raised $4 million (€ 3.5 million) in investment to expand the manufacturing capabilities of Biosensia, the Irish biotech firm it acquired earlier this year.

The company said the Series A funding, which was led by Arsenal Capital Management, will also be used to expand Biosensia’s Dublin facilities to support the commercial launch of new tests by its parent.

“The past year has been transformative for Kypha with the acquisition of Biosensia and explosive growth in the complement therapeutics market. Building on eight years of technical innovation and deep understanding of clinical workflows, we are excited to secure this additional funding in support of commercial and strategic partnering goals that will deliver pivotal companion diagnostics and immune monitoring solutions to drug developers, patients, providers and payers,” said Kypha chief executive Chad Stiening.

“Together we can ensure earlier detection, accurate and cost-effective diagnosis, faster treatment optimisation and improved management of many lifelong immune-mediated conditions,” he added.

Biosensia was founded in Dublin in 2009 by Prof Gareth Redmond, now head of chemistry at University College Dublin, and Prof Gabriel Crean, formerly chief executive at Luxembourg Institute of Science and Technology.

The NovaUCD-based company has developed a point-of-care in-vitro diagnosis system known as RapiPlex that can produce laboratory quality test results quickly, as against having to wait days or weeks as is often the case when sent to a laboratory. The system can also run multiple diagnoses at the same time.

Biosensia, which also offers contract assay development and manufacturing, had secured about $10 million (€8.7 million) in funding prior to its acquisition for an undisclosed sum in July with backers including Atlantic Bridge, Seroba Life Sciences, Street Capital and Act Venture Capital. The company has also previously received funding under the EU’s Horizon 2020 programme.