Shares in Diaceutics surge on first day of trading in London 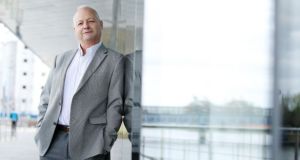 Diaceutics co-founder Peter Keeling: “It has been hugely empowering for the company and sets us up for the next stage of growth.”

Shares in Irish data analytics company Diaceutics got off to a strong start in its first day of trading on London’s junior market, jumping by just over a quarter.

At the end of its maiden session, the market capitalisation of the company had jumped to £66.45 million, from £53 million based on the 76 pence per share opening price.

The company raised £17 million through a placing of 22,368,427 ordinary shares and now trades under the AIM symbol DXRX.

The shares jumped as much as 30 per cent in morning trade before some profit taking trimmed the gain on the session to 25.66 per cent,with the stock closing at 95.5 pence.

“It has been hugely empowering for the company and sets us up for the next stage of growth,” said Mr Keeling.

He said the company made the decision to list on the stock market for a number of reasons, including faster access to growth capital, and to bring confidence and transparency for their partners, most of whom are publicly listed companies.

“We’ve been building Diaceutics since 2005 – it’s been a long time to be an overnight success,” he said. “We walked into a market where no one else was bringing an IPO, and we’re almost three times oversubscribed.”

Mr Keeling said the funds would be used to fund acquisition of data and IT capabilities to drive the business, develop its new software as a service platform and extend into new geographical markets.

“We’ve a huge mission and ambition and now we have a sufficient war chest,” he said.