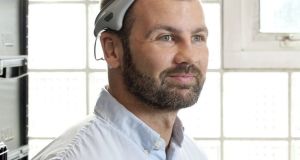 Neurovalens, a Belfast-headquartered technology company that has developed a headband which can help users to lose weight, has raised £4.6 million (€5.4m) in a funding round, one of the largest ever generated by an Northern start-up.

Neurovalens was established by Dr Jason McKeown and neuroscientist Paul McGeoch in 2015, and was named as Northern Ireland’s best start-up in the Invest NI Propel Programme awards the same year.

The company is behind Modius, a headband that affects the part of the brain associated with appetite and cravings.

Dr McKeown said the investment would allow for further medical trials in the areas of obesity and type 2 diabetes, and was also to be used to support the company’s wider research into issues such as insomnia, mental health and epilepsy.

“This latest wave of funding is vital as it will propel our work to a new level,” he said.

Dr McKeown said the company expected to get medical approval for Modius within the next 12 to 18 months.

“With the concept now proven our immediate focus is on the development of neurological science to tackle the wider health and lifestyle issues affecting today’s generations. It’s a very exciting time for our business.”

Neurovalens previously raised more than €1 million in late 2017 in a crowdfunding round on Indiegogo, with the campaign receiving backing from more than 4,000 people in 84 countries.