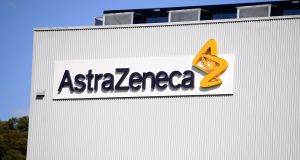 Several German doctors have questioned why only 8 per cent of the subjects in the Oxford vaccine trials were between 56 and 69 years of age. Photograph: EPA

Days before its expected EU approval, Germany’s vaccine authorities have warned the AstraZeneca Covid-19 shot is not suitable for over-65s.

The recommendation by the Robert Koch Institute (RKI) prompted a 2 per cent slide in shares of the Swedish pharmaceutical company, already locked in a row with the European Commission over vaccine delivery dates and capacity.

“There are currently insufficient data available to assess the vaccine efficacy from 65 years of age,” said the RKI committee in a statement issued by Germany’s federal health ministry on Thursday.

Other vaccines using new mRNA technology, including that developed by German company BioNTech, are suitable for all age groups, it said, but “the AstraZeneca ... should only be offered to people aged 18-64 years at each stage”.

The European Medicines Agency (EMA) is due to make a decision on Friday on whether to approve AstraZeneca’s Covid-19 vaccine.

Several German doctors have questioned why only 8 per cent of the subjects in the Oxford vaccine trials were between 56 and 69 years of age, and only 3 to 4 per cent were over 70 years of age.

AstraZeneca chief executive Pascal Soriot said the low numbers of subjects in those categories was a deliberate ethical choice by researchers at Oxford University.

“Oxford ... didn’t want to test older people until they had enough data from the 18-55 year-old group,” he told Germany’s Welt daily. “But we have robust data that prove a strong antibody production against the virus among older people.”

Last week AstraZeneca announced it would cut initial deliveries to the EU from 80 million doses to 31 million due to problems with its production facility in Belgium.

On Thursday Belgian authorities paid a call on the plant, at the request of the European Commission, amid ongoing frustration by EU officials and national governments over the firm’s explanations.

The factory operated by Novasep, a life sciences contractor, is located in Seneffe, an hour south of Brussels.

Germany’s health ministry said on Thursday it was studying the RKI recommendation. Earlier this week, federal health minister Jens Spahn said he would await the EMA ruling before deciding how to distribute the AstraZeneca vaccine.