Why is there no serious engagement on joint North-South approach to Covid? 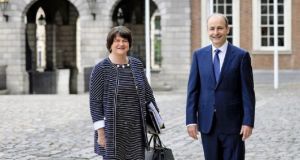 Dublin understands that the DUP will not agree to a joint approach and, as a result, Taoiseach Micheál Martin has not pushed First Minister and DUP leader Arlene Foster on the issue. File Photograph: Julien Behal Photography

The Government says it will provide data from passenger locator forms to the authorities in Northern Ireland in the coming days.

But there is little expectation in Government of substantive co-operation on Covid-19 measures with the Stormont Executive or the British government, according to several senior sources with knowledge of the matter.

The Government has been criticised, especially by Sinn Féin, for its failure to agree an “all-Ireland” strategy on Covid with the Executive. But sources with knowledge of contacts say there has never been serious engagement on a joint approach to key Covid control measures such as quarantine, travel restrictions or the shutdown of social and economic life.

Dublin understands that the DUP will not agree to a joint approach. As a result, Taoiseach Micheál Martin has not pushed First Minister and DUP leader Arlene Foster on the issue.

Records show there has been reasonably frequent contact between the two leaders since the summer, with calls and meetings with Foster and the Deputy First Minister Michelle O’Neill on eight occasions between July and December. Since the North-South Ministerial Council meeting in December there has been a call with both on December 13th and separate calls to the two women last Monday (January 25th). Martin also keeps a private channel of communication open to Foster.

But there are no substantive discussions on an agreed approach that would devise a single Covid policy for the island. The most that can or will be achieved is some degree of alignment, in which the two administrations adopt similar approaches to lockdown, etc. But a one-island approach is not on the cards, according to people with knowledge of the policy.

“The UK is the ‘mainland’,” says another person who has been involved in discussions, characterising the DUP’s view and assessing that there is “zero chance” that the Northern Executive would agree to any restrictions on flights coming into Belfast from airports in England, Scotland or Wales.

“They will never change on flights,” says one senior source in Dublin. “We all know it. But we have to be seen to try.”

Another senior source in Dublin is more sanguine. “We are edging towards more co-operation,” the source says, stressing the contacts between public health officials on both sides of the Border. “But on the political side, the decision-making is an entirely separate process.”

“The First Minister has a very definite viewpoint – it’s part of the UK, it’s domestic travel and they set their own rules.”

Another senior official in Dublin says simply – “You’ll never get the DUP to treat travel from Great Britain as anything other than domestic.”

In a statement issued to The Irish Times – Government Buildings said: “The Taoiseach, the Minister for Health and officials are in regular contact with their counterparts in Northern Ireland on the ongoing Covid-19 pandemic.

“They have discussed areas of co-operation around alignment of approach and the impact of the new variant.

“This co-operation has included a recent joint statement by the two Chief Medical Officers Dr Tony Holohan and Dr Michael McBride on the need for people to adhere to public health measures.”

While Dublin officials stress DUP reluctance, that is not the whole story either. The Irish Government has moved at a glacial pace on the provision of information from passenger data firms to the North, and restrictions were previously announced here without any reference to the Stormont administration. Foster also took offence over the Taoiseach’s suggestion that the North was not testing for the UK variant.

Trying to get around the lack of a joint all-Ireland approach, there have been some suggestions in recent days of a “two islands” strategy, agreed between the British and Irish governments. But sources in Dublin are even more dismissive of this.

While relations between the two governments are good on health matters, there is no prospect of any sort of joint policy. “It’s a bit of distraction,” says one senior source. “It’s just not going to happen.”